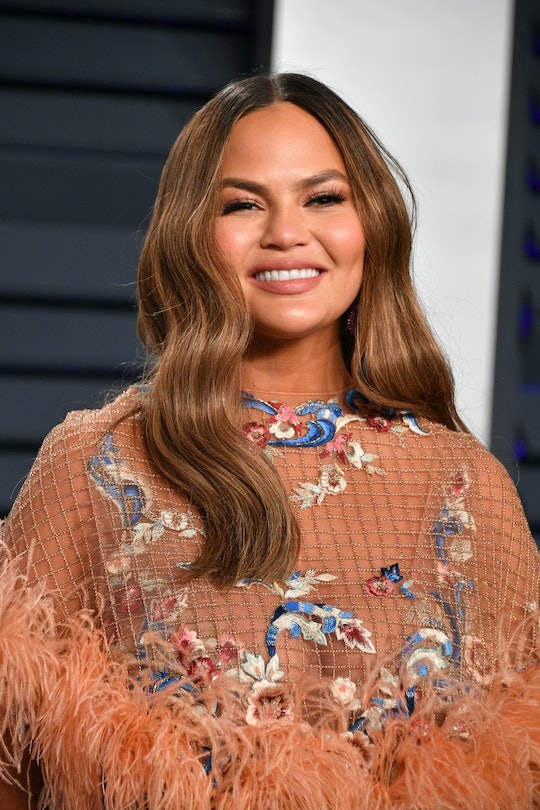 Chrissy Teigen and her husband John Legend were staying at an Airbnb recently when they found a door in the basement with a sign that read "Do Not Enter." Of course, the model, entrepreneur, and mom of two disregarded the sign entirely. "You can't put up that sign and expect people not to enter it," she tells Romper via phone. After opening the ominous door, Teigen and her husband found six ferrets. Yes, six. "I went in and there was just trapeze stuff and I fell in love with this ferret," she says. "It was amazing to me, and John could not have been more disgusted."

To assume Teigen's life with two kids is shenanigan-free would be a grave mistake. Sure, she's not a stereotypical, kid-free "wild child" anymore, but this new phase in Teigen's life is just as unpredictable and exciting. After all, she's finding secret doors leading to rooms filled with ferrets and has a nocturnal hamster named Peanut Butter. (Who "loves her wheel" and is "alive and thriving," by the way.)

That's not to say that Teigen isn't, from time to time, wistful about the days of kid-free past. "There are certain places where we can't go on vacation anymore, or that we know we've grown out of," she says. "And we've learned because we've tried going to those places and we were like, 'Ugh, this just isn't the same with kids.'"

But that doesn't mean Teigen spends her time yearning for her kid-free days, or feels as if she's somehow missing out on what kid-free life has to offer. Time spent with her children is sacred; a bi-product of constantly being busy, she says. "The balance is really easy when you like having your kids around because you’re working so much," she says. "So, I’d say that’s been the easiest part of family life is finding that time."

How Teigen manages to find that time does seem impossible, though. Especially since she's filming Lip Sync Battle, launching her own recipe site, and even appearing in movies like Hotel Transylvania 3: Summer Vacation. And now, as the Creative Consultant for Pampers Pure, she can put "designed new diaper prints" on her seemingly ever-expanding resume. The Pampers "Chrissy Pack" features two of her favorite new prints: pretzels and bulldogs, and is exclusively available right now at Target. (Tess Holiday recently commented on Teigen's Instagram post asking, "OK but are these available in adult sizes?" and, like, same.)

But even this latest creative endeavor is a way to connect her pre-baby life to the life she now has as a mom of two. "We have the bulldog faces, which is an homage to my bulldog Puddy, and of course we have Paul the bulldog now," she says. Bulldogs, she adds, shaped her relationship and her life with John. “Our first family were bulldogs, that’s how it all started, so bringing it back and putting them on the diapers I think is just so cute."

So while it's not always easy, Teigen has found a way to settle into life as a mom of two while simultaneously enjoying a vibrant career that allows her to spend time cultivating her creative side, enjoying her husband, and loving on her children. And, for Teigen, being ready to leave the kid-free life behind is a big reason why she can enjoy life as a mom and a wife so thoroughly now.

"I will say that I'm really glad I was wild and crazy when I was younger," she says. "It just feels like I was very ready, and the things I get to do now I'm much happier doing them. When I was wild that was fun, too, and that was perfect for the time it was in, but I like being a mom now and I like being a wife and this is the kind of life I was ready for now."

That's not to say it's easy, though. Like most parents of two children, Teigen ends a majority of her days feeling as though she has given more of her time, energy, and attention to one child over the other. "I think a lot of parents overcompensate with the other child, the older child, because they do need a lot of attention and they see this new being come into the mix and they get worried, 'Am I going to be forgotten?'" she says. "And you kind of overcompensate and give so much more." And since Luna, age 3, is busier than Miles — "Miles is just happy with a bottle, and food, and sleep, that's it" — it's easy for Teigen to focus on her more. "You definitely give a lot to your toddler," she says. "And they need it, too, so that’s OK."

But Teigen is looking forward to Miles's toddler stage, too, even if that will mean an end to the baby snuggles. "Some people are newborn people, some people are toddler people. I'd say John and I flourish with toddlers," she says. While her youngest is "cute and cuddly" and "the sweetest little bug," Teigen is ready for her son to start walking. "I know people say it’s crazy, but I could really use the help with Luna," she laughs. "And I think they’re going to be such a good team together, so I'm looking forward to the first steps actually."

So while it's easy, from an outsider looking in, to watch Teigen juggle family life and entrepreneurship and the pressure that comes with being a television personality and assume she's nothing if not overwhelmed, she relishes this new phase of life and the challenges, successes, ups, and downs it brings. "[John and I] honestly, truly enjoy having [our kids] around," she says. "Of course breaks are needed and desired at times, but it’s never like a big thing. We love to go away, like leave mom with them and go away for a night or go wine tasting or something, but for the most part we do generally enjoy being with them. And I can’t believe I’d ever say that, but it’s just a new phase of life that they’re very much a big part of."

And since that new phase of life also includes nocturnal hamsters and basement rooms filled with a surprisingly large number of ferrets, there's no denying that Teigen is certainly living her best mom-life.