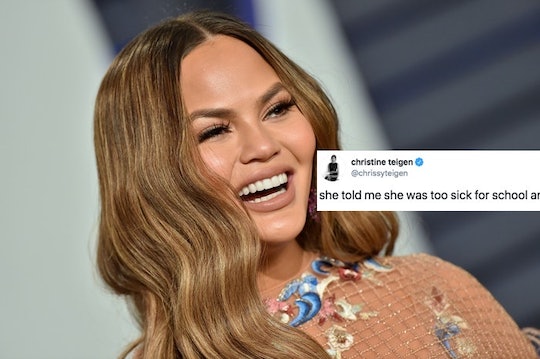 It's that time of year! No, not holiday shopping season. I'm talking about that magical time when kids have a perpetual cough and faucet nose. If your kids go to preschool or daycare, it's almost guaranteed they'll be sick with some sort of virus this winter. The real struggle for parents, however, is deciding whether to keep them home from school. For example, Chrissy Teigen's daughter Luna said she was "too sick for school" recently and, like many parents would, the mom of two believed her. But, like nearly all parents have experienced, it seems the 3-year-old is pretty dang convincing when she wants a day off.

On Wednesday, 3-year-old Luna had apparently convinced her mom that she was unwell. "She told me she was too sick for school and I believed it," Teigen captioned a Twitter photo of Luna striking a pose with a huge smile in front of their fireplace. Clearly, there was a swift and miraculous recovery.

Teigen's Twitter followers couldn't help but chime in with their take on the model being bamboozled by her daughter — and how they fully supported Luna. One person declared "She’s too cute NOT to believe!! Yay! Mommy/daughter mental health day! My kid & I had them all the time." Another Twitter user commented, "The ol thermometer in front of the fireplace trick." Yet another person wrote, "She looks pretty sick to me...better let her stay home the rest of the week. Maybe take her to @Disneyland for some fresh air and exercise."

Still, others cautioned the risks of what could happen if you send kids to school because you don't believe they're sick. One follower commented, "Once my son did that and didn’t believe him and an hour later school called to say he threw up in the classroom (1st grade) and PS they never 'rest' when they are 'sick' and home from school"

Later on Wednesday, Luna was apparently feeling well enough to sing a song of her own creation. And boy, was it a doozy. "OK, Mama gonna put you to bed," Luna sings in a video Teigen posted to Instagram, which is a perfectly normal, lullaby-esque song for a 3-year-old to sing, right? That's when things take a dark, yet hilarious, turn. Her lyrics go a little something like this:

LOL. Well, this is probably the best use of a sick day.

As a mom of four young kiddos, I've definitely been in Chrissy Teigen's shoes before. However, I've also ended up sending my kid to school — only to get a call from the nurse to pick up a sick child who had a fever/thrown up halfway through the day. Fun stuff.

What it boils down to is this: More often than not, parents make the right call when it comes to sending kids to school or keeping them home. Other times? Your perfectly un-sick kid ends up playing hooky and then going viral by writing a hilariously morbid song. Or at least, Luna Stephens does.