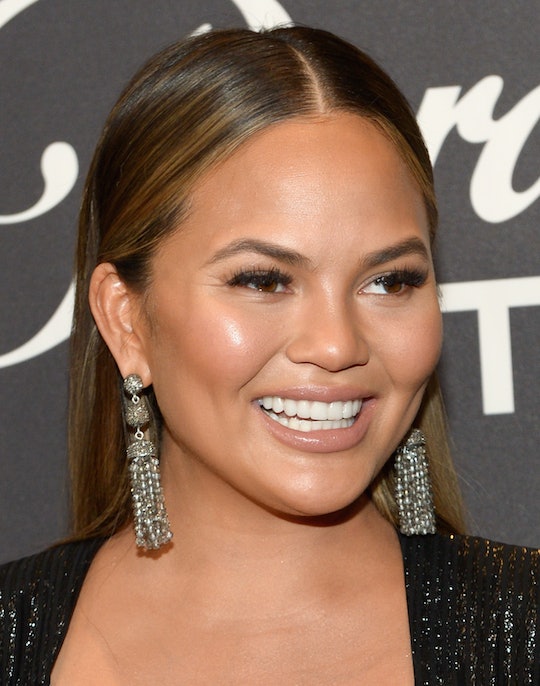 Walking into her room in a midtown hotel in Manhattan, it's hard to tell that Chrissy Teigen is pregnant and mid-way through an exhausting day of press events. Reclining comfortably on a couch, wearing all white, she's relaxed, all smiles, and frankly ethereal. When I was pregnant I was barely able to get out of bed, let alone sit upright and have a coherent conversation with another human being. But after only a few minutes of speaking to Teigen about her second pregnancy, postpartum depression (PPD), and the difficulties of newborn life she's sure to face in the near-future, it's obvious as to why she's extraordinarily calm, cool, and otherwise collected.

"I let myself go a little bit more with the second one," she laughs. "Because I'm just so comfortable with being a mom now. I trust that everything is going to be OK. I'm able to predict things a little more." It's this inner trust that strikes me the most as Teigen discusses the less-than-fabulous moments of life as an exhausted, overwhelmed, sleep-deprived mom with a newborn, and the likelihood that she will develop postpartum depression again, after her son is born.

"[Postpartum depression] is kind of like the process of labor itself," Teigen says. "It's so painful, there's so much happening, it's such a blur, and then you push it out and then you don't remember that pain anymore." And while she says she can't always remember how bad it was, Teigen has footage that brings back the pain and isolation of PPD in an undeniable way. "There's actual footage of me living in it," she says. "I would be on TV and I would be in a dark place or really unhappy place or having to pretend to be happy and jump around and dance, and I can see the pain or the disdain in my face."

I was just sad and I felt so pathetic and I felt gross and so hideous and I felt these feelings that I associated with just being selfish.

A reported one in nine women will experience symptoms of postpartum depression, according to the Centers for Disease Control and Prevention (CDC), yet Teigen never heard anyone talk about it when she was pregnant with her daughter, Luna, who is about to turn 2. As a result, she truly didn't know she was suffering from such a common postpartum condition. "It didn't cross my mind that I had it. It wasn't something that I thought about, because I always heard it being a 'Susan Smith' thing or a really, really dark place with horribly negative thoughts, but there are so many different levels to it," she says. "For me, I was just sad and I felt so pathetic and I felt gross and so hideous and I felt these feelings that I associated with just being selfish."

In a 2014 survey conducted by BabyCenter, 25 percent of the 1,500 mothers who participated said they were too embarrassed to admit their feelings related to postpartum depression, 23 percent said they felt guilty about them, and 16 percent said they didn't want to be labeled as suffering from a mental illness. A culture of silence and shame leaves new moms suffering in silence, and Teigen was no exception.

But letting herself go means trusting the process of this second pregnancy, and that includes the possibility that Teigen will experience PPD for a second time. "Honestly, it's not a fear of mine anymore," she says, "because of all the help I get. I feel like, now, as soon as I get that first sense, I'm really going to know, 'OK, this is it.' It's almost like when you're in a nightmare and you can tell yourself 'this is a dream, this is a dream, this is a dream' and it's easier to get through it. I think I'm going to have that, John is going to be more vocal, and hopefully everyone around me will be able to call me out on it this time around."

That doesn't mean Teigen is entirely laid back about every aspect of life with two children, though. In fact, there's one part of having a newborn she's definitely not looking forward to. "The first three months!" she exclaims, laughing as if to keep herself from crying. "Those first three to four months were harder for me than the nine months of pregnancy, and anything after those first three months. Harder than IVF, and harder than the couple year process before. You're always leaking something or bleeding something! Truly, I just felt so wet and sweaty and I'd wake up and there'd be milk and a stain and I didn't know the difference between the two."

I'm just not looking forward to going to the bathroom with a water bottle every day.

Teigen talks, specifically, about the postpartum bathroom situation: a special seventh circle of hell every new mom loathes with every exhausted fiber of her overwhelmed being. And yet, in her laid-back, "let myself go," trust-the-process attitude, even Teigen can make a painful pee situation funny. "I'm just not looking forward to going to the bathroom with a water bottle every day," she laughs, referring to the dreaded perineal irrigation bottle all moms who deliver vaginally know only too well. "John was like, 'Are you going to the bathroom?' and I was like, 'Yes. And, yes, this is my water bottle. What?'"

She does have the upcoming diaper changes on lock, though. In fact, that's the least of her worries. On March 22, Teigen announced via her Instagram that she's now a Creative Consultant for the Pampers Pure collection. "We've been a Pampers family since the day Luna was born and will be with baby boy too," the post reads. "I immediately fell in love with this new collection of diapers and wipes that offers pure protection that works." With at least one of the many worries and responsibilities resting on a new mom's shoulders out of the way, Teigen is thankful she can let go, focus on what really matters, and get through those first three months of life with a newborn. "It's just the feeling of feeling physically yucky, and doughy, and that's tough, but we all go through it," she says.

For women experiencing pregnancy and postpartum, "letting yourself go" is often considered a negative; a sign that you're no longer punishing yourself in order to adhere to some unrealistic, often harmful social standard of beauty. But for Teigen, it's clear that letting herself go has less to do with the number of times she's been to the gym (four times during this entire pregnancy, she tells me) and more to do with a state of mind. And while nothing is truly predictable in pregnancy, motherhood, or life, there's one thing Teigen does know she can look forward to when her son is born.

"I just remember watching Luna so closely," she says, "because you really want to catch their first crawl, and even the first time they learn to grab things. You look at their fingers and every little thing like that. And, I mean, there's nothing like that first word."