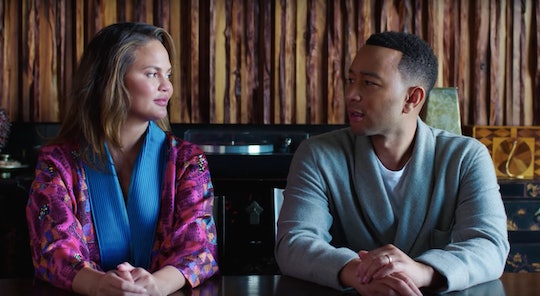 Chrissy Teigen Revealed A Saucy, Yet Very Relatable Detail About Her Wedding Night

Whether she's getting blocked by President Trump on Twitter, gossiping about the tantalizing drama happening on 90 Day Fiancé, or just chilling on her couch in a luxurious robe with Luna and Miles, Chrissy Teigen is all about keeping it real. And that even includes discussions about her wedding night. In a hilarious "lie detector test" video for Vanity Fair, Chrissy Teigen grilled John Legend about wedding night sex, or more specifically, the fact that they did not do the deed after exchanging their "I dos."

The video — part of Vanity Fair's new YouTube page, Vanity Fair Hollywood — opens with the pair cozied up on the couch. The video plays on the premise that Teigen doesn't trust Legend enough to take his word for things, enter the lie detector. Among the topics broached are how relatable Teigen is with her fans, the secrets behind their marriage, if she actually won a Mac & Cheese eating competition once upon a time, whether John Legend his real or stage name, and more. Mixed in there, a little over halfway through, is the topic of wedding night consummation. Why not, right?

First, though, Legend gets his chance to grill Teigen, asking her things like, “Is our relationship just a really long, convoluted publicity stunt to get you more Twitter followers?” The answer: No, because Legend actually has more than she does. But she has “way more Instagram followers," so she'll forgive him.

When the tables turn, Teigen has her turn to ask the questions and give us the really juicy stuff. After Legend answers honestly that, no, he is not "waiting on her to lose the baby weight" — bless him — Teigen gets intimate. "Did you want to have sex on our wedding night?" she asks Legend, her husband of six years, to which he replies, "Absolutely." Unfortunately, that wasn't the case. "Well then I'm sorry," Teigen replies. LOL. "We eventually had it," Legend reminds her, which is obviously evident from the existence of their two cute little ones. After bursting into laughter, Teigen tells him, "No one has sex on their wedding night!"

From there, the talk stays on the topic of sex for a bit longer. "At this moment right now though, are you concerned that don't have enough sex?" Teigen asks. "No," Legend answers, "Especially after last night." OK, you two... Get a room, would ya? But really, please don't. Please keep sharing your adorable relationship with the world because we need all the marital happiness we can get. And as for the question asked early in the video as to whether or not the two of you are "goals," allow me to answer for all of society: Yes, yes you are.