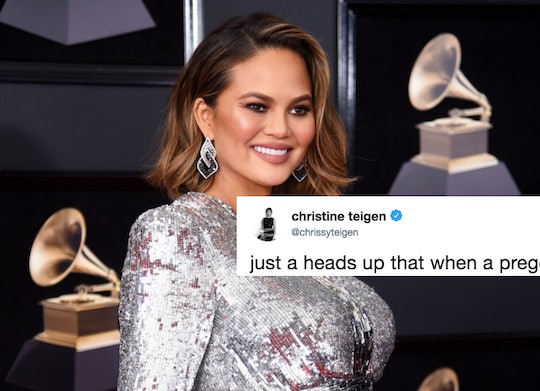 Pregnancy is a weird thing. (Profound, yes I know.) But seriously, it boggles my mind how differently women's bodies can experience the journey of creating life. A lucky few seem to "show" pregnancy only in their bellies. Others? All over the place — their thighs, butt, face, you name it. And others may actually lose weight during pregnancy. Some moms-to-be don't even realize they're pregnant until they randomly go into labor. Still other women know almost immediately when there's a baby on board. Pregnancy really is a weird and tricky thing, so when it comes right down to it, Chrissy Teigen's rule for talking about pregnancy weight is the only one you need.

Teigen and her husband, John Legend, announced they're expecting baby number two back in November, W Magazine reported. The famous couple had previously been open about their struggle with infertility and had revealed that their daughter, Luna, was born with the help of in vitro fertilization (IVF.) Now, Teigen is due with IVF baby number two — a boy this time, according to Us Weekly — in June. The model and cookbook author took to Twitter on Monday to provide an update on her pregnancy weight gain so far.

"Up 40 pounds and not one ounce went to my butt," she tweeted. "Please stop shaming the buttless, we are trying."

Less than an hour later, the expectant mama followed this up with a PSA for her followers. "Just a heads up that when a preggo says what they've gained, you can only share what you gained if it's more. Not less," Teigen tweeted. "THEMS THE RULES."

Some of Teigen's followers took this as a cue to cheer Teigen up by sharing their pregnancy weight gains. One Twitter user commented, "Ok Chrissy I was in culinary school when I got pregnant with my first. Gained 100 lbs. hope I made your day!"

Another person tweeted, "70 lbs. SEVENTY. I gained an Olsen twin basically. Luckily I los[t] almost 50 of it by the time I left the hospital. Guess that was a lot of water weight!"

Actress Minnie Driver even chimed in, writing, "75. And my boobs weighed 5lbs each- I know this, cause I weighed them in a Wholefoods." Teigen then replied, "Melon scale!! Good idea! Lol."

Somehow, though, one person managed to miss the point of Teigen's post entirely. "I gained 12lbs with both of my boys and lost 25lbs with 1 and 35lbs with the other," a Twitter user wrote. Teigen didn't waste any time with her response, shooting back in jest, "What did I just say Rachel."

Other followers shared stories of women one-upping them while on the topic of pregnancy weight gain. "You mean like how I said I gained 40 lbs and my cousin said she gained ONE POUND," one Twitter user wrote, along with a highly-appropriate GIF of Teigen sporting a WTF face.

Another one of Teigen's followers pointed out that women should also consider this rule after they've given birth as well. And I'm going to have to second this one, guys.

For your entertainment, here are a few other recent tweets by Teigen, who — between cravings and reflux — appears to be lamenting what pregnancy has done to her body.

Here's the bottom line, folks: There is not one right way for a woman's body to experience pregnancy. Sure, there are recommendations for weight gain based on a woman's pre-pregnancy BMI, as the Centers for Disease Control ans Prevention (CDC) points out. But this is merely a guideline. Until you're actually pregnant, it's difficult to tell how your body will react — and surprise you! This can even change from pregnancy to pregnancy for the same woman.

So the next time a pregnant woman decides to confide how much weight she's gained, it's probably best to heed Chrissy Teigen's "rule." (Or better yet, resist the urge to compare unless someone point-blank asks you.) Because you never know what another expectant mama is going through.