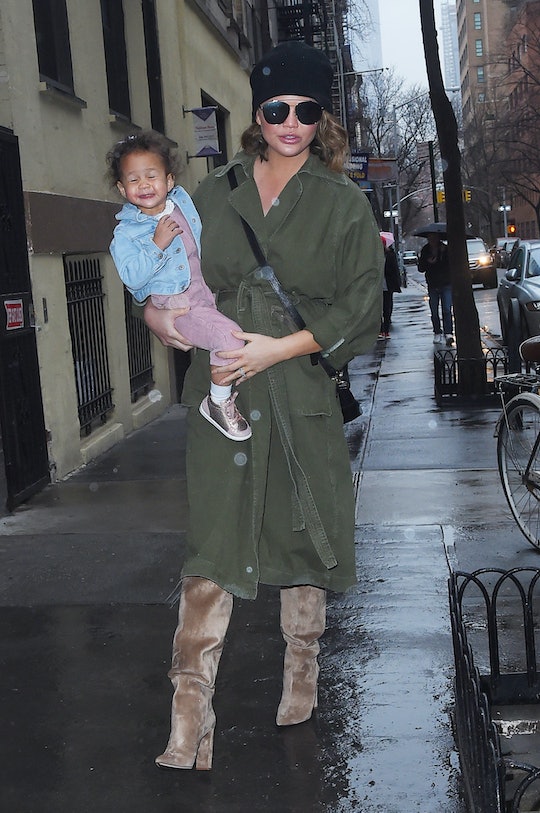 It's easy to look at celebrity family photos and feel a sense of inadequacy. When was the last time you jetted your kids off to a private island, or even to Six Flags? And how do they get those flawless family photos when toddler won't keep her finger out of her nose? While some celebs don't talk about it often, Chrissy Teigen isn't afraid to share she has help with parenting her two kids, as she opened up about in her family's recent Vanity Fair cover story, and it's an important perspective to keep while you scroll through you Instagram newsfeed.

The wonder of social media is the only reason we mere mortals have access to the inner workings of brilliant minds like Teigen, but it's also a quicksand trap of comparison with picture perfect lives on display day and night. Teigen is known for her quick wit and candor, but she's aware that looks can be deceiving. For example, even when she shares nothing but adorable kid content, she isn't afraid to let the world know that she and her husband John Legend "have help" with Luna and Miles. They aren't doing it all on their own.

Among other topics, Teigen and Legend talked about their family lives with Vanity Fair in preparation for the cover shoot that was released on Monday. In the midst of Legend popping out to go for a swim with Luna and Miles chasing Luna around because he "desperately wants to hug her," Teigen offered readers a quick reality check. After the family's nanny put Miles down for a nap, Teigen told Vanity Fair, that she isn't ashamed to admit that they have help.

"I hate pretending that we do it on our own," she told the magazine. "We have daytime help, nighttime, weekend. I don't know how my mom did it."

This isn't the first time Teigen has opened up about how juggling a busy lifestyle also comes with outside help. For example, in a 2017 interview with Yahoo Style, when Luna was 10 months old, Teigen was asked how she's able to do "it all," and she replied with an honest answer. "Having help," Teigen said in the 2017 interview. "My mom lives with us. I have hair and makeup people... I’m not getting up and doing all this by myself. If I’m not being done for something, I’m not going anywhere. A lot of hands go into it. We have help. It’s important for people to know that."

And more recently, on Twitter, Teigen responded to a fan who asked her how she manages her career and motherhood. "... girl I have HELP and a half. That’s it," she wrote in September. "There is no way I could have done it without it. I’m so lucky to have it and I don’t know how anyone else does it. I have so much respect for all of you. (also our amazing set provided an amazing daycare room)."

Unsurprisingly, Teigen and Legend focused on family for much of their story with Vanity Fair, which affectionately called them "the first family we deserve." And I have to agree; reading the article, they seem more like your quirky and friendly next door neighbors than superstar celebrities. But it's important to keep in mind that they are celebrities and behind the perfectly posed photos and on-point rhetoric there is a team of people helping them get through the day-to-day struggles that may be slipping you up.

There's no need for comparison here, folks, every family needs a helping hand, including the lovely Teigen-Legend family.