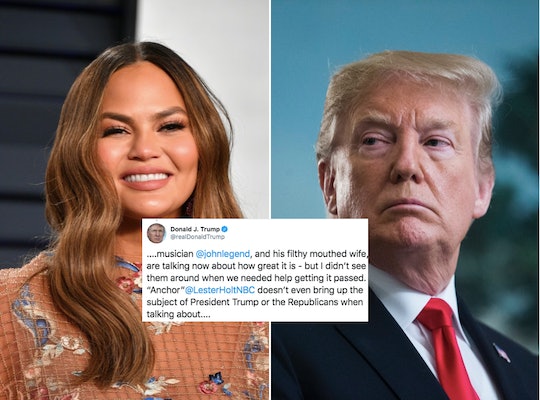 Honestly, you would think that by now President Donald Trump would know better than to enter into a Twitter debate with the Queen of the Tweet, Chrissy Teigen. But, alas, our POTUS just had to go there. And true to form, Teigen hit back at Trump after he targeted her in his latest late-night Twitter tantrum, calling her a "filthy mouthed wife," and it was simply magnificent.

The back-and-forth began when Trump penned a series of tweets shortly before midnight on Monday, as People reported. His tweets came in response to a Sunday night special on MSNBC with NBC Nightly News anchor Lester Holt, featuring John Legend, according to the BBC. Trump's complaint seems to be that people weren't giving him enough credit for criminal justice reform. These "people pushing so hard for Criminal Justice Reform ... came to me as a group and asked for my help," a reference to the First Step Act Trump signed into law in December, according to USA Today, which increases the reduction in jail time for good behavior. But "these people," apparently aren't giving Trump the credit he deserves.

Trump tweeted, "Guys like boring musician @johnlegend, and his filthy mouthed wife, are talking now about how great it is - but I didn’t see them around when we needed help getting it passed." He went on to add, "'Anchor' @LesterHoltNBC doesn’t even bring up the subject of President Trump or the Republicans when talking about the importance or passage of Criminal Justice Reform. They only talk about the minor players, or people that had nothing to do with it ... And the people that so desperately sought my help when everyone else had failed, all they talk about now is Impeaching President Trump!"

Never one to take a tweet attack lying down, Teigen came for Trump in glorious fashion and didn't hold any punches. She used a particularly poignant three word phrase that I wouldn't recommend repeating in front of the little ones.

"Luna, remember the night before your first day of school? When mommy was making your sign and the p***y a** b*tch president had his 9th meltdown of the day," she tweeted.

But she didn't stop there. In another tweet, Teigen pointed out that not only was she not a guest on the MSNBC special with Legend, she wasn't even mentioned in it. “The absolute best part of his tweet is I literally didn’t speak in the special, nor was I mentioned," she wrote. "I’m cackling at the pointless addition of me because he cannot not be a b*tch.”

She also begged her followers not to get get her phrase trending on Twitter, as People reported, though it most certainly did. “No guys no please do not make this trend, for it is my fight ... not yours!!!!!!”

From there, Teigen passed the Twitter battle baton to her loving hubby, who took it gladly. "Imagine being president of a whole country and spending your Sunday night hate-watching MSNBC hoping somebody--ANYBODY--will praise you," he wrote. "Melania, please praise this man. He needs you." Legend followed up the tweet with with a previously trending photo of the first lady with Canadian Prime Minister Justin Trudeau at the G-7 summit with the caption, "Ah yes, Melania is otherwise occupied. My apologies, @realDonaldTrump."

The couple's followers joined in on the fun, tweets went viral, a dirty hashtag may or may not be trending. Trump has since turned his attention to other adversaries, but the moral of this story remains: don't challenge Chrissy Teigen to a tweet battle. It won't end well for you.