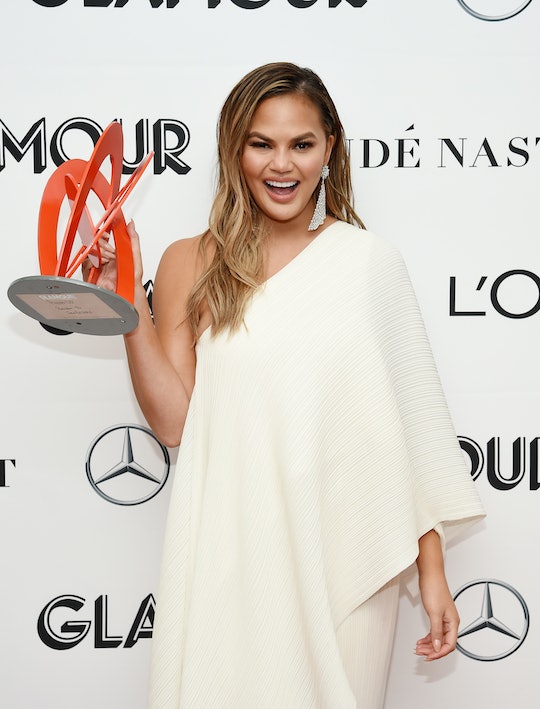 If you're not following Chrissy Teigen on Twitter, then you're seriously missing out. Between her random musings on life, hilarious kid anecdotes, on-point clap backs, and her random/awkward/totally relatable stories, Teigen is every bit of the national treasure she's made out to be. It's no wonder she has 10.7 million Twitter followers. And in case you missed it, Chrissy Teigen kicked off the new year in the most "Chrissy Teigen" way on live TV.

So here's the lowdown. Teigen was helping host NBC's live New Year's Eve celebration in Times Square Monday night, according to Today. Everything was going splendidly as the ball dropped and everyone ran in 2019. As the band was playing "Auld Lang Syne and Carson Daly was sipping on champagne, Teigen leaned in to hug Leslie Jones. Except, Jones was holding an umbrella — and instead of it being an NBD exchange, Teigen ended up getting smashed in the face with said umbrella on live TV. Because of course she did. Take a look at the painful — yet somehow still hilarious — hug fail in the clip below.

If Teigen was hoping that viewers somehow missed the umbrella crash, she was out of luck. One Twitter user definitely caught the awkward moment and made sure to tag the celebrity. "Oh no @chrissyteigen I hope you’re ok!!!" they wrote, also sharing a clip of the incident. "Happy New Year!!!"

As USA Today reported, Teigen took to Twitter a short while later to reassure concerned followers that she walked away from the encounter unscathed. Ultimately, she responded to this particular user, tweeting, "I'm okay!"

And guys, the commentary the followed was everything. One fan commented, "Jesus! Be careful! She’s a national treasure!" Which, I mean, isn't untrue.

Another Twitter user promptly created a meme. "I'M SORRY CHRISSY I'M SO SORRY BUT I HAD TO," they wrote along with their masterpiece. In the top panel is a shot of the successful NYE hug, with the words, "What I'm hoping for in 2019." In the bottom panel is a still of Teigen recoiling in pain after getting umbrella-ed in the eye, with the words, "What 2019 will most likely be like." LOL. (Hopefully not, though.)

Yet another follower pointed out, "Only 5.6 seconds into 2019 and you’ve already become a meme." Yup. Leave it to Chrissy.

Another Twitter user chimed in with basically everyone's reaction, "I love you, but I was crying from laughing so hard when this happened." Same.

Later on New Year's Day, Teigen followed up her hilarious umbrella-to-the-eye-on-national-TV stunt with an update. "7am. Heading back out to time’s square to find my eyeball," she tweeted.

To which a follower responded, "I turned one in to Lost and Found. Exact description?"

"Round. Brown dot in the middle perhaps slightly bloody," Teigen bantered back.

Of course, this isn't the first time Teigen has had an awkward moment on live TV and instantly became a meme. Like that time when she didn't practice her crying face before her husband accepted an award at the 2015 Golden Globes, according to HuffPost.

Or this epic meme of Teigen trying to duck out of the camera's shot during the 2018 Emmy Awards, according to Time.

But moments like these are exactly why we love the model/actress/cookbook author so much in the first place, right? She's quirky and clumsy and real — and she totally embraces her awkwardness. (Hopefully her eye really is okay, though.) Here's to hoping the rest of 2019 is decidedly less painful for Chrissy Teigen than the first few minutes were!