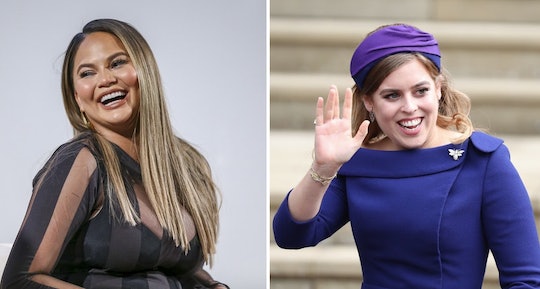 It seems like everyone wishes they could be friends with Chrissy Teigen — and why wouldn't they want to be? She's hilarious, she's real, and she can definitely cook you one of the best meals you've ever had. So, it makes sense that members of the royal family are clamoring to be Teigen's friend, too. People might have been surprised on Friday to see Chrissy Teigen and Princess Beatrice's Twitter exchange — but it was so much fun and cute, even if it was definitely unexpected.

Teigen isn't afraid to speak her mind at all, which is why she is probably obsessed with Twitter. Teigen takes to the website almost every day to share her thoughts on a wide variety of subjects. And on Thursday, Teigen was on the topic of "names" specifically "names for a little girl that she is not ready to have."

"'Bea' is such an adorable name," Teigen tweeted. "Someone name their kid Bea please. I'm not ready for more kids and John says no more dogs. I will be their god parent."

This prompted Teigen's followers to share photos of their own adorable children and family members with the name Bea (pronounced Bee, not Bee-uh or Bay-uh). But perhaps the most famous Bea was more than happy to be an honorary member of Teigen's family — Princess Beatrice of York — also known as Queen Elizabeth II's granddaughter.

Princess Beatrice replied to Teigen on Twitter, offering up her royal services — to be Teigen's honorary goddaughter. "I would adore to be your god daughter," Princess Beatrice told Teigen.

It makes sense why Princess Beatrice would reply to her. Chrissy Teigen, John Legend, and their two kids are (arguably) the closest thing that we have to a royal family in the United States (to some people). And just like a lot of people want to be a part of the royal family, just as many people want to be a part of Teigen and Legend's family. They have a lot of similarities — and it was only a matter of time before both worlds collided.

A few months later, Teigen and Legend dressed up as Princess Beatrice's grandmother and grandfather, Queen Elizabeth II and Prince Phillip, for Halloween, according to USA Today. Although Teigen later admitted that she and Legend never actually went out for the holiday, their costumes were hilarious and so on point.

And as it turns out, Teigen does have another connection to the royal family — she was a model on the game show, Deal or No Deal at the same time as Markle. In an interview with the Mail on Sunday, Teigen revealed a bit more about their relationship. Teigen said, according to Us Weekly:

I was on Deal or No Deal with her and she was lovely. Now everyone asks me what she was like and I say, 'Sorry, no dirt.' She's gorgeous.

But tweeting with Teigen is always a special occasion.