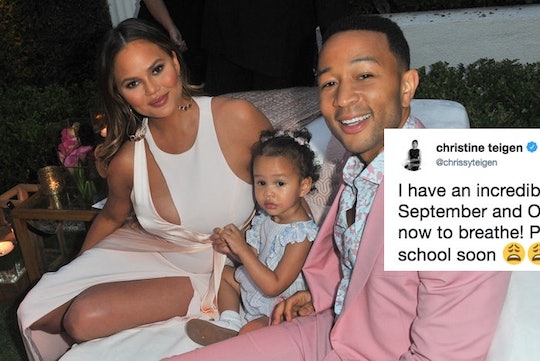 If it feels like Chrissy Teigen and John Legend's daughter, Luna, has basically grown up overnight, you're certainly not the only one thinking that. In fact, Teigen threw all her followers for a loop on Sunday when she casually tweeted that her oldest will be officially entering a new milestone in her life very, very soon. In case you missed it, on Twitter, Teigen revealed Luna is starting school this year and her legion of fans are rightfully freaking out and simply can't believe how fast time has flown by.

Luna has done a lot of growing up in the past year. Sure, she did only turn 2 in April, according to E! News, but the toddler has accomplished a lot for her young age, just in 2018. She got her first passport photos, traveled internationally with her parents, and became a big sister for the first time when her baby brother, Miles, was born in May. Needless to say, she's been busy — and her schedule is about to get a lot busier.

After enjoying some much needed time away from home on vacation in Bali for the past two weeks, according to E! News, Teigen revealed on Twitter on Sunday that this vacation has been necessary for one reason — her life is about to get a lot more hectic in the fall. For starters, Luna is going to school within the next few weeks.

Although the "amount of sh*t" that Teigen has coming up is unclear, Luna attending school will definitely add a level of stress. With Luna going to school for the first time, Teigen will now have the next 16 or so years to look forward to parent/teacher conferences, homework, and back-to-school shopping. It's definitely a little overwhelming, which is why Teigen's vacation is so well deserved. It's the last time that she will be back-to-school free for a very long time.

But most of Teigen's fans aren't concerned about the length of her family vacation; they're more concerned about the fact that her little girl is actually starting preschool. Teigen's followers took to Twitter to react to the news and freak out about how much Luna has grown in the past two years.

Seriously, it feels like Luna was just born yesterday, when really she was born in April 2016, according to E! News.

Although Luna's only 2, and it might seem like it is a little early for her to start school, there is no "magical age" to start preschool, according to The Bump. Most preschools start accepting kids between the ages of 2 and 4, according to Baby Center, but it really depends on if the child is ready to learn and be around other kids every day. So, if Teigen and Legend think Luna is ready to start socializing with other kids her age and ready to learn her ABCs, then she is probably ready to hit the books. Not really, but you get the point.

To say that Luna has learned a lot this past year is an understatement. As previously stated, this past year, Luna had to learn how to be a big sister to her brother, Miles, when he was born in May, according to People. Legend told People just a few days after Miles was born that Luna was learning how to share the spotlight with her baby bro. Legend said, according to People:

Luna's used to having us to herself. I think she's just starting to realize though that he might be competition. So in some ways it's good because she's stepping her game up. She's being more loving, she's singing louder, and dancing harder.

If Luna can learn how to hang out with a new baby in the house, then she can definitely learn how to count to more than 20 or learn how to share her toys with other kids in her pre-K class. But if Teigen's followers think that Luna seems old now, just wait until she enters the first grade...