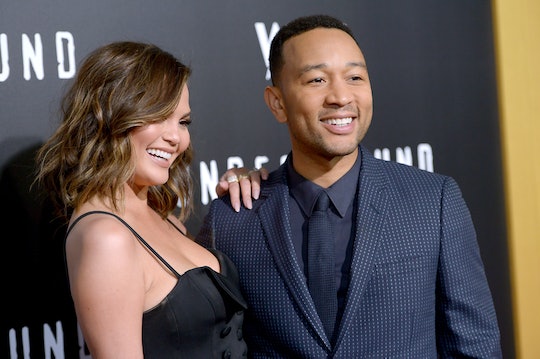 Chrissy Teigen is always inspiring, which is why it was extra heartbreaking to hear that she struggled with postpartum depression during the first few months after having baby Luna. But! There is a bright side: Chrissy Teigen said she's getting over her PPD in a recent interview with Refinery29. So to moms everywhere, believe what your friends and therapists are telling you. It gets better. Phew.

Just know that there's a light on the other side. When I was in the midst of everything, I could never imagine myself on the other side of it. Now, I'm able to look at September, October, November, December, and shake my head at how dark and crazy of a period it was.

Of course, like all kinds of depression, it's hard to see that light when you're in the thick of it. And Teigen isn't trying to sugarcoat anything. "... There's no better feeling than being out of it," she said. "Of course, you have your good and bad days. I just had a bad day a couple days ago. But the bad days do not outweigh the good days anymore."

It's hard to not to love how so very, very real Teigen keeps it, because when you're in the dark, nothing is more irritating than hearing someone say that there are only good days. That's just BS.

Even better news? Teigen is back at work on her second cookbook, which you might remember was a sticking point in her Glamour essay about her PPD. She had started a cookbook and had to put it on hold because it was getting to bee too much for her. But told Refinery29 that she's been emailing her co-editors recipes and starting to crush it again.

"I'm having so much fun," she said. "I'm really starting to feel like myself again." In fact, she's going to have a busy summer: Her plan is to work on the cookbook a bit and then go on tour with husband John Legend (and baby Luna) and then finish up her book when she gets back.

Plans! More good days than bad! And food! These are all great signs that Teigen is back at it. She's even been posting a bunch of videos of her cooking (she was making cheesy chicken fried steak the other day that was almost NSFW) on social media.

It's very good news that she's starting to feel better, but the real thing to be excited about is that Teigen is living her postpartum depression out loud so that other women know they aren't alone. It takes guts to put yourself out there like that, just like it takes guts to be a mom. Which means Teigen is pretty much killing it all around right now.