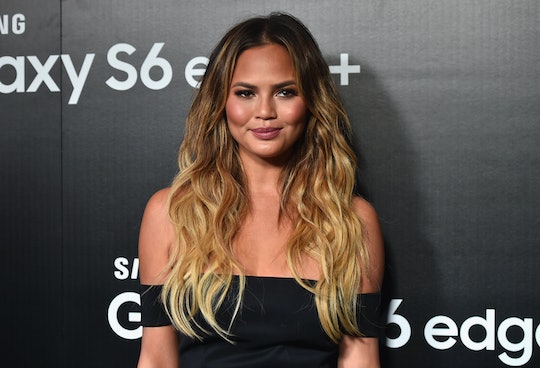 Chrissy Teigen, model, cookbook author, and Twitter goddess, has long been known for being open and honest. Like, painfully so. She would probably tell you about her poop if you asked really nicely. This can sometimes cause problems for her, as there's nothing the people of Twitter like more than attacking strangers for no good reason. And now that's she's pregnant... Well, we all know how everyone loves to get all up in a pregnant woman's business. The latest drama stems from the fact that Teigen chose the gender of her baby, leaving a whole bunch of people angry. But on Wednesday, Teigen shut down those same embryo gender critics in a way that only she could.

Teigen and her husband, John Legend, spent years trying to get pregnant and the couple were eventually able to conceive through in vitro fetilization. In an interview with People published on Wednesday, Teigen (who is promoting her new cookbook, Cravings) explained that she chose a female embryo because of the dynamic she anticipates between her daughter and her husband. "It excited me to see… just the thought of seeing him with a little girl," she said. "I think he deserves a little girl."

Teigen also told the magazine, "A boy will come along. We’ll get there too, so it’s not like we really have to pick." But that wasn't good enough for some nosy strangers, who called her out on Twitter for having the audacity to be in charge of the contents of her own uterus. Thankfully, she is, as previously mentioned, a Twitter goddess, and shut that mess down immediately.

This is far from the first time Teigen has had to defend her pregnancy on social media. After Instagramming her first belly photo, she was treated to a barrage of comments telling her that she was too big, and insisting that she must be pregnant with twins, or even triplets. Her response: "I did IVF. One at a time. It isn't twins. I can see the damn thing. Get out of my uterus!"

Days later, Teigen was shamed for daring to eat cereal (yes, really) because her "fans" thought she was poisoning her baby with artificial food dye. "Yes, I am living off dyed food," she tweeted in reply to the criticism, before adding,

Tuna too!! Gonna try to dye my tuna actually. Then have an icy, dyed vodka soda and that's just lunch.

Raise your hand if you're about to hop on a plane to go high-five her right now.

Possibly her best comeback, though, was completely wordless. When one misinformed Twitter user tweeted at her, "Doesn’t anyone get married before starting a family?" followed by an alphabet soup of hashtags, Teigan posted side-by-side pics of the tweet and her lovely left hand:

For the record, Teigen and Legend have been married since 2013. But more importantly, it's nobody's damn business whether they're married or not. And as for the size of her body and what she puts in it (be it food or embryo), that's between Teigen, Legend, and their doctors.

Teigen was gracious enough to answer some polite questions from well-meaning fans, and explained that her medical team was able to create 10 healthy embryos (six female and four male), after which they gave her the option to choose one to be implanted. She happened to want a daughter first. Lots of parents conceive while hoping for a particular gender, and it just so happens that Teigen was in a position to make her hope a reality.

After struggling with infertility for six years, are we really going to begrudge her the choice of which order she implants those hard-won embryos? Just let her live, for goodness' sake. And know that if you don't, she'll immediately own you in the best way possible, as she always does.