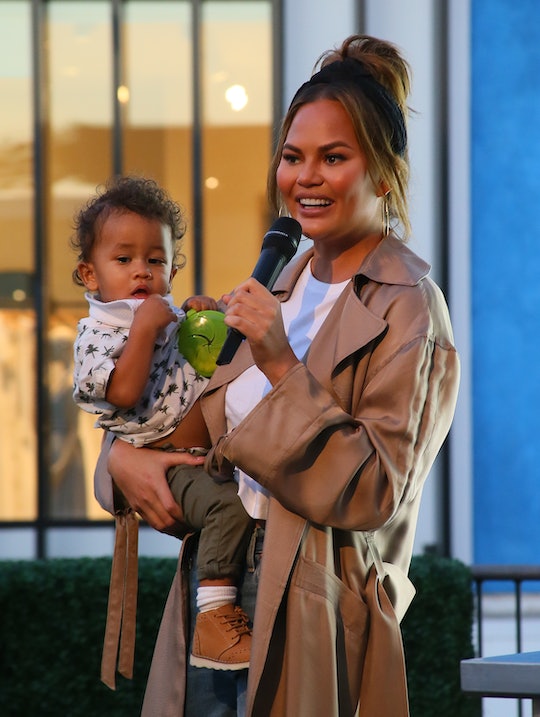 Ever wondered what it's like to parent in the public eye? Although you might never get to know what it's like firsthand, Chrissy Teigen's Q&A about being a celebrity parent provides some eye-opening insight. From the number of nannies she employs to how she feels about the paparazzi, Teigen didn't hold back a thing.

It doesn't need to be said that Teigen is one of the most forthcoming celebrities around, even if it's at her own expense. The model and author reminded fans of these qualities when on Sunday she participated in a candid Q&A about what it's like to be famous, especially where it concerns her family life.

Teigen covered many topics, but one big point she addressed concerned the paparazzi in regards to her children, Luna, 3, and Miles, 1. "Luna hates them," she replied to a fan. "In New York they don't really hide and they apologize when she freaks and stop photographing."

She continued, "Here in LA, they've learned to hide more and you don't know you're being photographed. I'd rather know."

In a similar vein to the whole paparazzi thing, Teigen explained how she's not as bothered by random fan interactions involving her kids. "I don't," she revealed when asked whether she cares if fans talk to Luna or Miles. "I know they're being sweet. A lot of people touch and hug which is weird to most people but I'm also a toucher without realizing. I dunno. I'm not mad at touch but I get people who are."

Switching things up a bit, Teigen also opened up about the number of nannies she and husband John Legend employ. Considering famous people often receive flak for having multiple babysitters, I was impressed she admitted to employing four. "We have 4 incredible people, not all at once," she shared. "One will rotate and stay through the night."

Hey, if you can afford it, why not?

But my personal fave was when Teigen opened up about a situation many parents dread — flying on planes with kids. "No one gives my kids nasty looks on the plane," she answered when asked to name the best celeb perk. "Anything, they're creepily nice and it is crazy unfair because they are just as annoying as other kids on a plane."

Ah, the joys of being famous.

And if you're wondering whether Teigen ever goes through her own mail or manages her bills, the answer is no. "I have a business accountant who handles everything and sends me summaries of my spending/income. I don't get mail," she admitted. Trés interesting.

Of course, Teigen is under no obligation to these Q&As. But I hope she continues because it's so fascinating to hear about her life behind-the-scenes, especially concerning her role as mom.