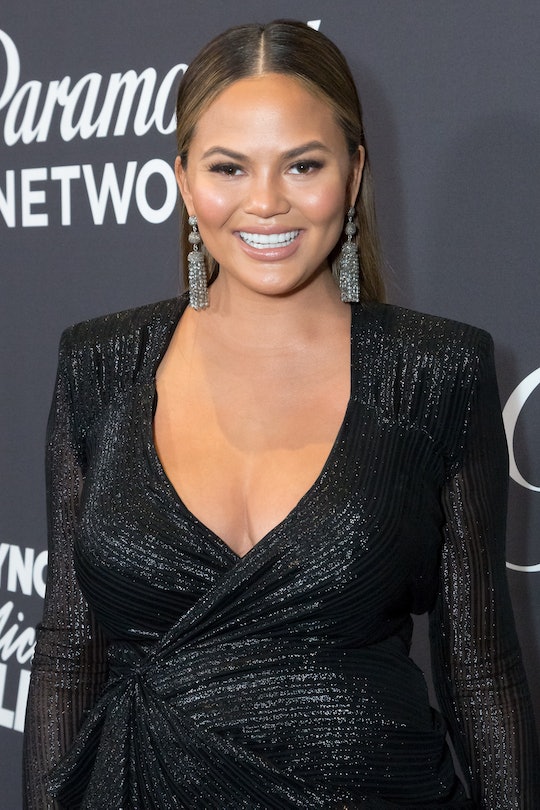 Chrissy Teigen Tweeted About Her Grey "Cruella" Hair, & The Internet Had The Best Response

Oh, Chrissy Teigen: You are my mom idol. I swear, this super honest and spunky mama always seems to have an interesting take on life. Whether she's hilariously lamenting the frustrations of raising a toddler, bravely raising awareness for postpartum depression and other mental illnesses, or just keeping things real when it comes to her day-to-day life, plenty of parents appreciate her candor. Well, the model and soon-to-be mom of two took Twitter on Monday to clear the air about something most of us will face one day. Chrissy Teigens' tweet about her grey hair has women celebrating their silver streaks, and I couldn't love her more.

"I have a skunk like streak of grey hair and I'm actually very into it," Teigen tweeted. "My cruella dreams are coming true!" Of course, the funny mom is referring to Cruella de Vil, the infamous villain from 101 Dalmations. While Teigen's thoughts on her hair are likely tongue-in-cheek (I mean, who really aspires to look like Cruella — even if her hair is pretty epic?) the fact that she's self-conscious about the greying of her locks is incredibly relatable. In response to her "dreams coming true," tweet, women proudly shared photos of themselves facing the same situation. And the result is empowering AF.

"I've had a natural white streak in my hair since I was 19," one Twitter user commented. "13 years later I still love it." (I have to admit, it is a pretty cool effect.)

Other women shared love for their greys, along with the quirky stories about why the silver strands are amazing. "My husband asked to pull it out and I yelled 'NO, MY SUPER POWERS," she tweeted. Another woman even has a special name for her premature greys. "I find new grey hairs on my head every day and I LOVE THEM. I'm only 24, so I'm not sure why they're already here but I call them my unicorn hairs."

One person even tweeted a stunning photo of a mom and daughter who have the same streak of white hair running down the middle of their heads. If you remember the story behind this particular photo — which went viral in November 2016 — this trait is caused by poliosis, a condition that creates a lack of pigment in the patch of hair and the skin around it, reported the Daily Mail. Just look at these beauties!

And even more women, who have opted to let their hair grey naturally without dyeing it, shared photos of themselves.

A (presumably balding) man also chimed into the conversation with a valid point. "I would love to go grey, but that ship has saaaaailed," he tweeted. Awww. Poor @notgavin.

Confession: I'm not even 30 yet, and I've been getting grey hairs for years. As HufPost reported, premature greying of the hair is largely due to genetics. (Which makes sense, considering my mother started noticing silver streaks around the same age.) But I'm still in hardcore denial. In fact, I've taken to plucking the little boogers out whenever I spot another one — which isn't actually recommended, as this can cause damage to the hair follicle over time. Plus if I continue down this path, I'll end up like @notgavin and eventually there will be nothing left to pluck out.

To me, these women are an inspiration, Even though getting grey hair is a natural part of aging, there is a certain stigma attached to it for women in particular . (Men, on the other hand, are considered to look "dignified" when they start going grey. Double standards much?) Still, plenty of women drop some serious cash to keep dyeing and touching up their hair. And for what? To damage their hair so they can keep up a more "youthful" appearance? No thanks. When my grey hairs eventually outnumber the blond ones, I hope I have the courage to just let it happen with as much grace as the women who commented in Teigan's tweet. That, or I'll be that old lady who continues dyeing it funky colors. Either way works for me.