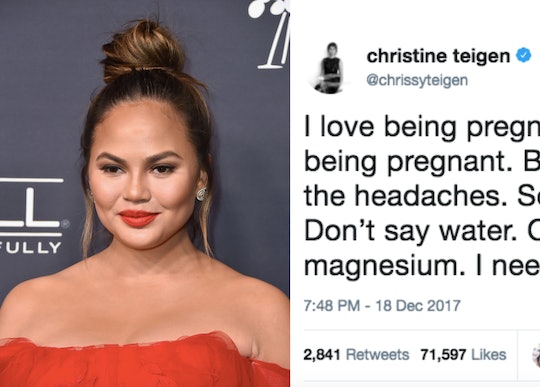 In this day and age, medical advice can be sought out just about anywhere. So, it isn't too surprising that the Queen of Twitter herself, Chrissy Teigen, has asked for advice about pregnancy headaches. After all, this isn't the first time the model and cookbook author has taken to social media to voice her concerns about her changing body. And it's kind of awesome.

As fans of Teigen already know to be true, the 32-year-old is an avid user of Twitter, and is also pretty famous for literally being blocked on the platform by President Trump. But since she announced her second pregnancy, Teigen has also been tweeting about her developing pregnancy and all the body changes and health challenges that come with it. Previously, Teigen also asked her 9.12 million Twitter followers whether or not it was normal for her to get so much bigger much faster with this pregnancy than with her first.

And now, Teigen is back at it again. This time though, she's not exactly posing a question, per say, but rather explaining one of the side effects of pregnancy that she is so not on board with. "I love being pregnant," she explained, before going on to say that those pesky pregnancy headaches were really starting to get to her.

But Teigen wasn't fishing for the typical advice from her followers. Oh no. She brushed off all the typical remedies for headaches like water, iron or painkillers — nothing normal like that. Instead, Teigen wanted something more substantial, something that would get rid of her headaches once and for all: witchcraft. And fortunately for her, the responses to her tweet were almost as epic as the tweet itself.

Really, though, Teigen's headaches aren't to be of too much concern, although they're certainly annoying. According to Fit Pregnancy, headaches are one of the most common side effects of being pregnant, and typically aren't anything to be too worried about. Obviously, your body experiences a lot of changes while you're, ya know, literally growing another human being inside of you. But that doesn't mean it isn't painful.

Additionally, the reasons headaches happen so often for a pregnant person are totally normal. Obviously, when you're pregnant, your body undergoes a lot of changes. And hormones, a lack of caffeine, or a change in posture are just a few of the explanations for why pregnant people experience headaches.

But of course, sometimes, when you're in pain, knowing the logical explanation doesn't really help. Nevertheless, many of Teigen's fans were able to give her some pretty solid tips to relieve her headache.

Any time that a pregnant person's body is at the center of the discussion there will always be people who think they know best. But at the end of the day, it's up to Teigen herself to decide how she wants to handle her headaches.

However, there are some doctor-approved natural remedies out there. According to the Mayo Clinic, pregnant people can use cold compresses, work out more, practice yoga and meditation, and make sure they're eating enough to help control their headaches and the frequency at which they occur. And if a pregnant person's headaches are getting too out of hand, doctors have also all agreed that acetaminophen is basically a safe bet for pregnant people, as long as they follow dosing instructions.

Moral of the story? Well, there's a few. First of all, if you want to see relatable pregnancy content, you should definitely follow Teigen on Twitter. And, secondly, if you're experiencing headaches during pregnancy, know that it's totally normal, and there are a lot of ways you can try to manage them.