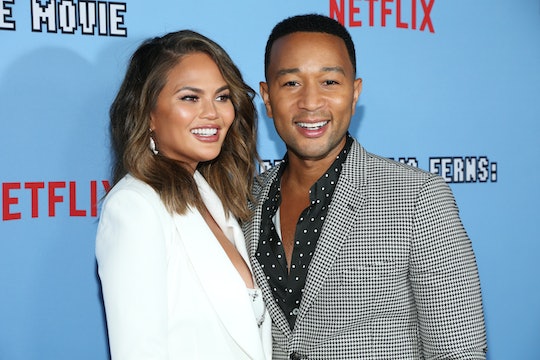 The couple celebrated their 12 year wedding anniversary in September, according to People, and they aren't letting time slow them down. In each and every post that Teigen makes about her husband, it's clear that they fall in love a little more each and every day. This was made evident on Saturday night, when Teigen tweeted that her husband changed his plans, just because she wasn't feeling the best and needed him by her side.

"I do not normally brag about John, as it is my schtick to make fun of him always, but he flew from London to LA instead of London to DC to have dinner with me and watch Love Island UK because I haven't been feeling like myself lately," she wrote. "Just a few hours, but it meant a lot. Thank you."

Legend was in London, England on Saturday, performing at a concert at The 02, according to Evening Standard. But he made a pit stop in Los Angeles (where they reside full time with their two kids — 3-year-old daughter, Luna, and 1-year-old son, Miles, according to Architectural Digest) just to see her. Although Legend had to play a show at the Kennedy Center in Washington D.C. on Sunday night and could only be with his wife for a few hours, he still went out of his way to show up and be there for her — even if they just ate some food and watched an episode of some reality show.

As if Legend's super large gesture of kindness wasn't already incredible enough, Teigen tweeted that Legend flew on "his least favorite airline" to see her on such short notice. "That is love," she tweeted.

No one is arguing with that. That man is so in love with her and it doesn't take much to see it. Not everyone would drop everything just to go and be with the person they love. But Legend did just that.

She has a point. She is always roasting her husband about something or another — whether she's embarrassing him on Twitter or knocking him down a peg so his ego doesn't get too big. Although Teigen would rather joke about her relationship than post something sentimental, it's nice to see this side to her.

Legend's gesture falls in line with Teigen's philosophy on marriage — be there for the other person, no matter what. In a 2018 interview with the blog, Well+Good, Teigen elaborated on this, according to Page Six. "I think it's really important to be complete partners in crime," she said. "I love the mentality of 'us against the world'. Even when you have kids, never forget your relationship as partners and lovers."

And at the end of the day, all that Legend wants is for her to be happy. In an interview with Cosmopolitan in 2017, he told the magazine that he wants to be there for his wife, no matter what. "I just want to support her," he said. "I just want her to be happy and live life to the fullest, most awesome life she can, and I want us to do it together. Whenever she sets her mind to anything, I always tell her, 'I want to support you, and help you do it.'"

Although Teigen might have been in a funk over the weekend, Legend was able to come to her side and make it all better. That's basically the definition of being a supportive husband.