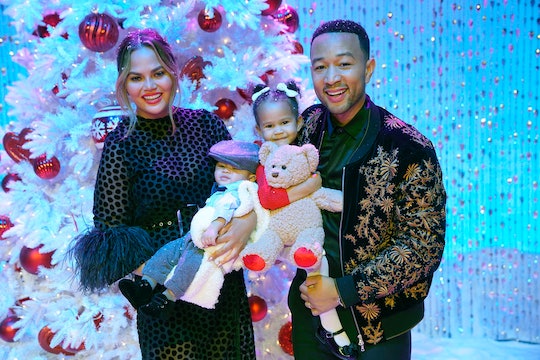 You Might Want To Borrow Some Of Chrissy Teigen's Christmas Traditions

As most people know, Chrissy Teigen and John Legend are parents to two adorable kids, their 2-year-old daughter Luna and 7-month-old son Miles. The couple often shares stories and tidbits about their family life, and most recently, Chrissy Teigen opened up about their holiday traditions. With celebrity status like theirs, they might seem a bit surprising, but TBH, the Teigen-Legend household seems like the place to be on Christmas.

In most households, Christmas night is typically reserved for watching movies and eating a feast, similar to Thanksgiving, as noted by Taste of Home. With that said, many families will serve up plenty of stuffing, meat, and mashed potatoes. But some families may choose to veer away from this tradition, Chrissy Teigen and John Legend included.

Instead of spending all morning cooking a ham and green bean casserole, Teigen told TODAY that her family prefers something that takes a little less time in the kitchen. In fact, they prefer something quick and simple — aka fast food.

"Christmas Day is more of like 'order McDonald's and go to the movies,'" Teigen told TODAY. "It's a very lazy day."

Honestly, this idea sounds fantastic. After all of the hectic preparation before Christmas and all of the money spent on presents, the last thing anyone wants to do is spend all day in the kitchen or spend hundreds of dollars on filet mignon for the entire family.

So, eating McDonald's (or any fast food for that matter) is the perfect solution. It's fast, dependable, and won't put a dent in that post-holiday budget. And c'mon, as all parents know, all kids will be pumped that they're eating french fries and chicken nuggets for dinner.

This isn't the first time Teigen has mentioned her family loves eating McDonald's on Christmas Day. Late last month, in a video for the food delivery app, Postmates, Teigen and Legend revealed that they've been ordering McDonald's on Christmas for the past two years, according to Delish. "It's a Chrissy tradition for sure," Legend said in the video. (Now, they may also choose to eat McDonald's because Teigen did reveal in a 2016 interview with Marie Claire that she hates eating turkey, a common Christmas entree.)

In addition to ordering McDonald's, Teigen also revealed to TODAY that her family opens up presents not on Christmas. "In my family, we open presents on Christmas Eve night. I think we're going to do presents Christmas Eve night if John is OK with that. We'll see. We haven't talked about it. But, he does anything I want," she told TODAY.

But, Teigen and her family do enjoy some things that are considered to be a bit more "traditional." After all, Legend has his own Christmas album, A Legendary Christmas, in which he covers classic holiday songs. And last month, the couple starred in their own holiday special, also titled A Legendary Christmas with John and Chrissy, where they entertained famous friends and showed viewers how they celebrate the holidays.

Teigen also loves filling up stockings for her family members and shared with TODAY that each year, the family watches the Radio City Rockettes perform at the Radio City Music Hall in New York City.

Although Teigen's holiday traditions may sound a bit untraditional, they honestly sound like a lot of fun. Really, a burger and some gifts with the fam sounds like a great day to me.