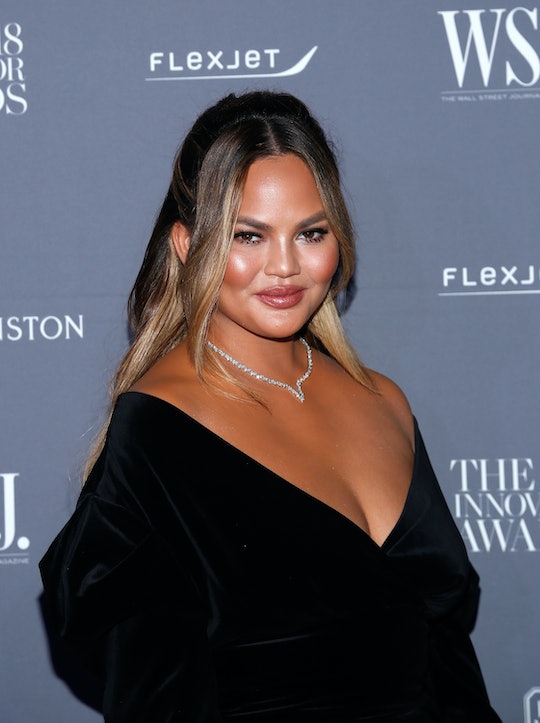 It's no secret that Chrissy Teigen is a fabulous cook (mac and cheese with garlicky breadcrumbs, anyone?), a gift she likes to show off on social media. But just when you thought the Teigen-Legend family couldn't get any more impressive, it turns out Chrissy Teigen's daughter Luna is following in her footsteps. Yep, 2-year-old Luna is a professional chef in training.

Teigen is all about involving her kids in her passion — aka cooking. In fact, Teigen announced in October 2018 that she's planning a cookbook for kids, sharing, according to People: "I really wanna make it awesome. I know kids have really simple palates and we all want to make them more refined, but they’re just kids, so we’re gonna do stuff that kids are going to love."

Although Teigen said she'll focus on "simple palates" for the book, she's encouraging Luna to adapt a more refined palate at home. Case in point: On Sunday, the mom taught Luna how to season two racks of lamb.

Teigen uploaded the impressive and cute videos to Twitter, highlighting Luna's finesse in the kitchen. After Luna smears some seasoning on the racks of lamb with her hands, she instructs Teigen to retrieve a mystery ingredient for her. Since Teigen isn't a mindreader, she had to point to and name every ingredient in her sight. "She’s tough but she’s fair," Teigen tweeted after Luna said "no" to rosemary, cheese, pepper, and bananas.

Despite Luna's indecision about ingredients, she's confident about her ability to season a piece of meat. Teigen is incredibly supportive of her daughter's passion, telling her in one video: "I think you're doing a really good job."

Of course, many fans are impressed with Luna's cooking skills.

"She’s giving Gordon Ramsay a run for his money," one person tweeted.

"Seasoning ribs in a princess dress is a big mood," someone else said.

One commenter wrote: "Luna’s out here cooking more advanced meals than I ever have... tbh wanna be her when I grow up."

"Do you hire her out?" another person asked. "I need a cake for my wedding if she bakes!?"

"My god she’s adorable how do you deal everyday," one supporter gushed.

As for Luna's ability to clear a plate? She's doing well in that department too. Teigen revealed this fact in December 2018, tweeting that Luna "now eats all of her food." Teigen's success was due to a "menu" she created specifically Luna, adding that she has her daughter "pay" for each item she orders.

"It’s working!!!! She now eats all her food when she orders from the menu and pays for it," Teigen wrote.

Teigen went out of her way to create these menus, telling fans, according to Us Weekly: "I’m spending my days making a menu, cooking and plating every meal and taking pics so my DARLING ANGEL will eat some thing. WHO HAVE I BECOME … I just love projects."

It's clear Teigen is working double-time in the kitchen, whether it's teaching Luna how to cook or coming up with creative ways to get her to eat. Who knows, maybe all of Teigen's hard work will inspire Luna to write her own cookbook one day. Stay tuned.