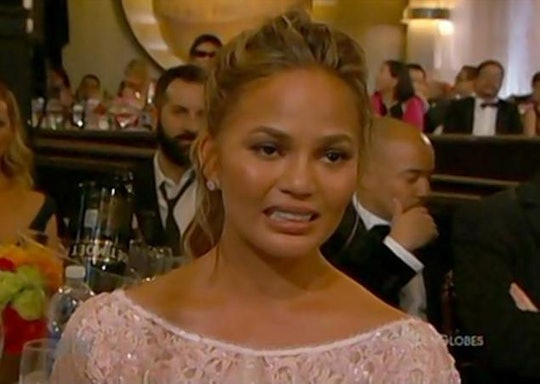 Remember the 2015 Golden Globes when Chrissy Teigen's awkward crying face went viral? Well, Chrissy Teigen remembers, too. In honor of the 2016 award show, MTV LA tweeted the meme asking Teigen where she was this year, to which she had the perfect reply: "Eating donuts in our new, empty home, making the same face."

The camera panned over to Teigen last year when her husband, John Legend, won the Golden Globe for Best Original Song for his work on "Glory," and Teigen was — rightfully so — emotional. She was proud of her husband, and she started to cry. And she just happened to be in a room full of cameras at the time, meaning there was no escaping the lens.

What's great about Teigen is that she doesn't let a bad picture get to her — in fact, she embraces it. She laughs at herself in the most charming and admirable way, even poking further fun at the photo. She commented on the fact that, in just five minutes, she had become a meme. And, without any hostility, she even took an Instagram photo with Legend making fun of the face caught on camera.

And at the Golden Globes Sunday, when the picture resurfaced, she didn't freak out or ignore it. She continued to play along, and be the awesome woman that she is.

And time had nothing to do with her demeanor. Tiegen was able to poke fun at herself shortly after the incident occurred last year.

Thanks for being such a good sport, Teigen, and for providing the world with one of the greatest reaction gifs out there.

Because we all have those awkward, ugly cry moments, it's just that most of us aren't surrounded by cameras when they happen (thank God).