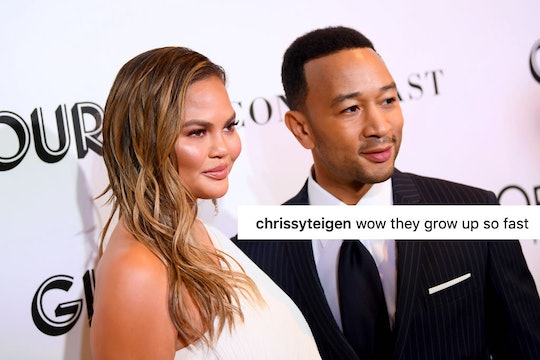 By now, everyone is well aware that Chrissy Teigen and John Legend's kids — 2-year-old daughter, Luna, and 9-month-old son, Miles — are their respective mini-mes. And after Teigen posted a nine-month update photo of Miles over the weekend, people couldn't stop commenting about how much the little boy looks like his dad. So on Sunday, Teigen shared an Instagram mocking John Legend's twinning with baby Miles and the whole thing is just so hilarious.

It's customary for parents to share monthly updates of their children on social media, especially when their kids are still babies. It's not only the perfect way for parents to see how much their kids have changed from month to month, but it also helps keep friends and family members in the loop about their little one's progress. And just like the rest of us, Teigen made Miles pose in front of his own progress chart and shared the sweet photo on Instagram.

Teigen, who can never resist a good trolling, had the perfect response to fans pointing out how similar Miles and Legend look. On Sunday, she shared a photo of Legend posing in front of his own update chart, wearing almost the exact same outfit as Miles. And his progress chart (clocking in at 482 months, or 40 years old, according to Harper's Bazaar) was absolutely perfect.

According to the chart, Legend (or Johnny) loves his family (a given), peanut butter with chocolate (he's a serious fan), and music (no surprise there). But, Legend isn't a fan of beets (who is?) or bad grammar.

While his favorite song is "I Say A Little Prayer" by Aretha Franklin, his favorite bedtime story is a bit more unconventional. On the chart, "Johnny" shared that he loves hearing The Rachel Maddow Show before going to bed.

The best part about this progress chart is that it's 100 percent accurate. In fact, Legend has stated before that he's a huge fan of chocolate and peanut butter. Back in 2018, for instance, Legend told The Washington Post, "Peanut butter and chocolate belong together and their love makes the world a tastier place."

And in October that same year, Legend told CNBC that he listens to The Rachel Maddow Show on his headphones every night before bed. "So I'll just have it in my headphones and catch up because I missed it the night before, and see how the world is falling apart again," he told CNBC at the time.

Beyond the cute factoids shared in Legend's chart, Teigen's followers, of course, were totally smitten over the whole thing. "Miles grew overnight," one fan joked in the comments. Another wrote, "Couple goals." One more perfectly stated, "Y'all so ridiculous I love it."

So, really, if you weren't convinced that Miles is, indeed, a clone of John Legend, these new photos of them should convince you. And hopefully Teigen will share a few more update posts about the father-son duo, because they really are gifts that keep on giving.