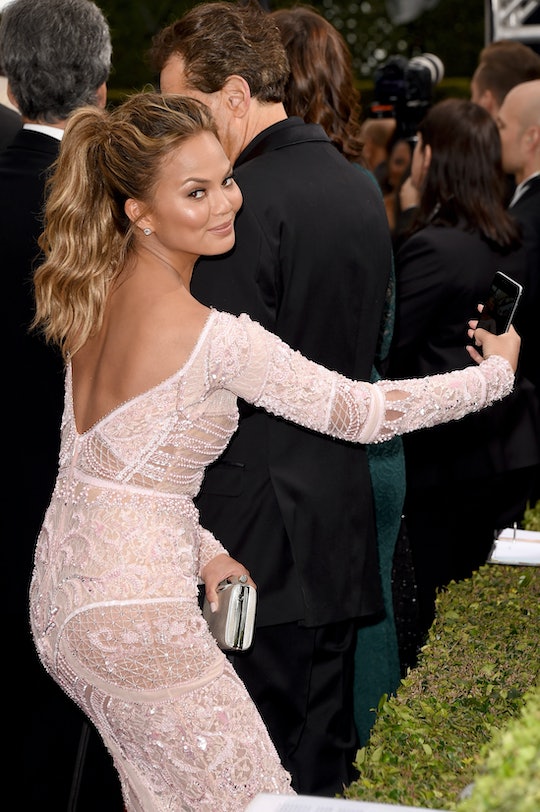 Chrissy Teigen is finally fed up with how her comment section devolves into attacks and bullying. The model has been a social media darling for a while now but, on Sunday, she addressed the problem head-on in a series of tweets aimed at internet bullies. She begged Instagram to implement a way for users to disable comments in their posts in response to the constant vitriol she was seeing in her comment sections. Never one to shy away from a fight, Chrissy Teigen’s Instagram rant is a reminder of why we all need to get along—even when we’re surfing the web.

Of course, there's an important life lesson to be learned here: If you want to feel good about humanity, avoid reading internet comment sections. It can feel like comment sections are where kindness and politeness go to die. A lot of people seem to relish in the anonymity being online provide and use it as an excuse to be mean to everyone and everything in their comments. Teigen wants that all to end.

On Sunday, Teigen pleaded with Instagram to develop a way to get rid of comments altogether on her posts. “Instagram needs an option to disable comments for the sanity of my followers who go absolutely bonkers on each other for HOURS on end," she lamented.

The New York Times best selling cookbook author currently has 6.5 million followers on Instagram. Unsurprising, considering how many people have responded to her snaps and refreshing, 100% real (and hilarious) captions—she goes make-up free, eats Cheetos, and likes being lazy too.

Despite her popularity, Teigen can no longer stand her Instagram followers going at each other in the comments sections of her pics. On Sunday, the stunner added, “I can’t have people threatening each other and losing their minds in extremely HARMLESS photos. It isn’t something I will take anymore.” She continued,

I understand it would result in less engagement, which = less [money], but I can promise significantly less engagement when I quit because of it. ... I can take it or choose not to read it. But the back & forth insanity among my followers goes for HOURS/DAYS...I really think it's horrible.

Teigen’s Instagram account is pretty harmless. It’s basically all photos of her husband (and new baby), adorable bull dogs, and delicious food (my mouth salivates every time I scroll through her page). As one twitter follower asked incredulously, “People argue over pictures of good food and dogs? How controversial could that be?” The Sports Illustrated cover girl replied that even the most innocuous subjects could spur a fight. “Oh honey, I had countries going to WAR trying to claim baklava.” (As a Turkish girl, not surprising to me… that shit is divisive.)

This isn’t the first time the beauty has called out her followers for their vicious attacks on her and each other in the comments section. In March, the then-pregnant model posted two pics of her recent appearance in Sports Illustrated’s Swimsuit Issue (her seventh time being featured). She looks awesome and yet some commenters found pleasure in breaking down every inch of her body, explaining why she isn’t Barbie-doll perfect. (Obviously the critics are authorities on swimsuit photos since they themselves have likely been in a magazine dedicated to swim suits.) One person suggested there was “no way” the model wasn’t pregnant in the photo, even though it was shot last year and her stomach is completely flat.

In the second SI pic she posted, Teigen called out her haters in the caption. “Shoutout to everyone dissecting every little part of my bod in the last comment thread, you’re all really wonderful, kind, flawless beauties — I can tell from your pages!!” (Seriously, those in glass houses…)

Teigen’s pitch for a tool that would disable comment sections on Instagram posts is genius. It’s not a bad idea for the popular photo platform to offer users a way to silence some of the haters without having to scroll through a number of comments (which can be thousands per post if your last name is Teigen or Swift) and block or report every single offensive one. As Teigen tweeted in response to a Twitter follower suggesting she do just that, she responded, "I cannot spend my time reporting thousands of individual comments.” Nor should she have to, in my opinion. The girl is busy!

She drew that point home when people kept suggesting she block individuals. “Sigh. Why do I have to keep explaining this! Why should I have to go through 8000+ comments and break up fights?” Teigen may be a new mom but she is not the mother of her Instagram followers. It shouldn’t be her job to police what’s going on below her posts.

As always, some Twitter users took the time to give the model “advice” on how to handle the situation. A lot of that advice could be broken down to "don’t read the comments" or "don’t post if you don’t want people to talk negatively about you." Although both are great ideas (sarcasm), it seems unfair for people to ask that Teigen stop living her life because of a handful of mean-spirited followers.

Teigen conceded a little to those who may consider her rant “#firstworldproblems,” tweeting, “I that know in the grand scheme of things, it’s such a silly cause to launch a tirade against but I am just really bummed to see it all day.” (Don't back down, Chrissy!)

The Instagram-comments disable tool idea is amazing. Seriously, how is this not a thing, even when we hear countless stories about cyber bullying in the news every day? Adding a way for users to disable all comments would protect innocent people from vicious online attacks and, maybe even save a few lives. If nothing else, it'll at least let Chrissy Teigen Instagram her dog in peace.