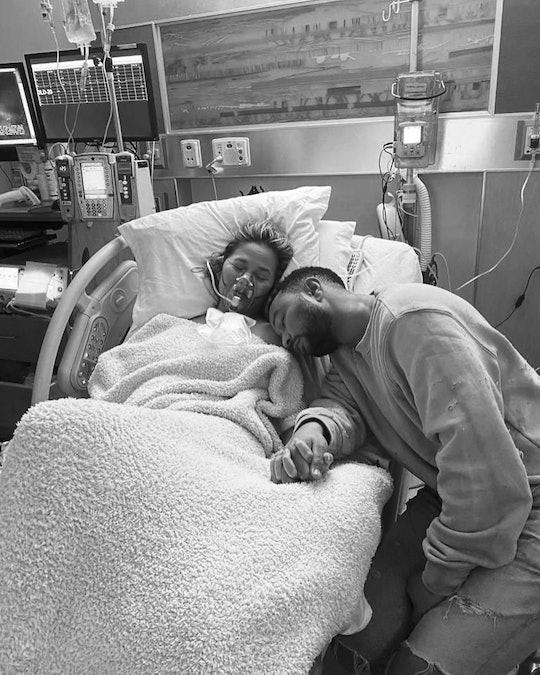 Why It Matters That Chrissy Shared Intimate Photos of Her Loss

On Oct. 1, just weeks after announcing her third pregnancy with husband John Legend, Chrissy Teigen revealed that she lost her baby in a heartbreaking post on Instagram. "We are shocked and in the kind of deep pain you only hear about, the kind of pain we’ve never felt before," her words begin. Raw black and white images of Teigen and Legend include one of the pair of the holding their dead child (covered in a blanket). She's right: We do only ever hear about it, and rarely. But Teigen let the world see what her loss looked like. As someone who has experienced miscarriage, this means more to me than I can say.

While Teigen and her family have received an outpouring of support from fans and friends, some responses have been less than encouraging. Unhinged, Pizzagate conspiracy theorists are gleefully mocking Teigen's loss. Politicians and conservative activists suggested that sorrow over the miscarriage is incompatible with (or worse, comeuppance for) the couple's commitment to abortion access. And then there are those who feel that the images are "gross," an "overshare," or otherwise inappropriate. "Some things should be kept private" reads one comment, with many more expressing the same sentiment.

I can explain why, actually, it's not only not inappropriate to record and share a moment like this, but meaningful in ways most people, fortunately, cannot understand.

I don't have the patience, knowhow, or wherewithal to try to explain to QAnon weirdos and politicians who would make someone else's tragedy political why what they're doing is awful. But I can explain why, actually, it's not only not inappropriate to record and share a moment like this, but meaningful in ways most people, fortunately, cannot understand.

Pregnancy loss is a deeply personal experience that many people, reasonably, don't want to share in intimate detail. That's their right. And it can be jarring to bear witness to someone else's pain, especially when that pain is on a taboo subject like miscarriage. Because when confronted with it, when you have to acknowledge it's possible and real in more than the abstract, you can't help but think about that kind of pain and loss yourself. It makes people uncomfortable, and some people get petulant when they get uncomfortable.

"Why would even take pictures of something like that?"

"This is not an opportunity to grab attention!"

"This comes off as shallow."

These are all direct quotes from Twitter commenters, and while admittedly Twitter is the place where tact and decency go to die, it's a sentiment I've heard in person in similar situations. A friend of mine who posted a picture of her cuddling her stillborn son on Facebook — the only time she would ever be able to hold him, when she once thought she'd have the rest of her life — was deemed by a mutual acquaintance as "ghoulish." Since the news of Teigen's pregnancy broke, I've had friends tell me, "It's a little weird that she posted that, though?"

I get it. But I urge people to look past their discomfort.

Because for those of us who have experienced the pain of pregnancy loss, this is one of the only times we've seen our own anguish reflected back at us. Representation matters, and there is power in seeing that we are not alone in our trauma; a comfort in knowing that what we're feeling isn't indulgent or silly or shameful. It's real, it's valid, and it's mentionable.

I felt shame that my body had failed. I felt stupid that I was taking it so hard. I felt that all-too-common instinct in women to swallow my feelings because I didn't want to make anyone else feel uncomfortable.

I have never felt more alone in my life than in the weeks following my miscarriage. Intellectually, I knew that this was something that happened to millions of women a year — according to the March of Dimes, 10 to 15% of recognized pregnancies end in miscarriage. (It is estimated that up to half of all pregnancies end miscarriage, but most occur before people know they're even pregnant.) I knew that the shame and stigma I felt about my own loss was statistically ridiculous and entirely unwarranted.

But I still felt it. I felt shame that my body had failed. I felt stupid that I was taking it so hard. I felt that all-too-common instinct in women to swallow my feelings because I didn't want to make anyone else feel uncomfortable. I can't help but think that this was in no small part due to fact that I had never really seen another person really open up about their pregnancy loss in the immediate aftermath. I had see it months or years later, when friends or celebs felt they could get through the telling without tears. When they had their rainbow baby. That early, gutted pain was always politely swallowed down. Hidden behind smiling selfies and funny memes that never once hinted that the people were going through, possibly, one of the worst experiences of their life.

I can't imagine to know exactly what Teigen is going through: my miscarriage happened within a week of finding out I was pregnant, around 6 or 7 weeks gestation. I had barely begun to process the idea of having another child when I started cramping and bleeding. I didn't have to go to the hospital. I never held the body that would have been my child, as Teigen did. But in her tears, in her longing for others to see "This was my baby, and he never made it to the outside world alive but he mattered to me" I see something painfully familiar... and bittersweetly heartening.

What I would have given, seven years ago, to have seen that validation — that permission. To have a chorus of sympathetic strangers say, "I'm so sorry." Strangers who had also gone through this and felt empowered to share their own pain.

It's cliche to say celebrities are brave for sharing the darker moments of their lives on social media, but this vulnerability was important. I feel tremendous gratitude to Teigen for not just sharing but showing what it feels like to lose a child.

More Like This
Chrissy Teigen Gives a Cheeky Behind The Scenes Peek Into Her Pregnancy Glam Squad
10 Ways Breastfeeding Is Good For Moms, Too
9 Reasons Why Some Women Can't Breastfeed
Dr. Jill Biden Just Delivered Some Frank, But Powerful, Advice On Motherhood