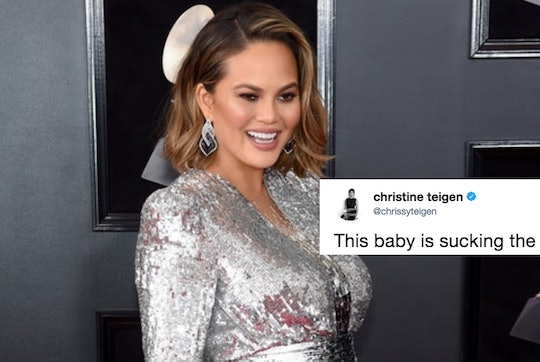 When it comes to being truthful about the many less than glamorous aspects of pregnancy, there's no one better suited to the job than Chrissy Teigen. In fact, Teigen's latest pregnancy tweet is a little dark, but hilariously honest. And as usual, her loyal following of fellow moms is all about her revelation.

Teigen is currently expecting her second child with husband and superstar John Legend. All throughout her pregnancy, the mama-to-be has tweeted about the many ways in which pregnancy can get a girl down. From bathroom crises to increasingly chubby cheeks, she's bared it all. Most recently, Teigen penned an oh so relatable tweet on Saturday that read:

This baby is sucking the life from me. Drinking my water, making me dry. Eating my food, making me hungry. Taking my health, making me sick. Why do we create these monsters they want us dead?

As another expectant mother, let me just say OMG yes. These babies take and they take, and they give nothing in return but heartburn, adult acne, and mood swings. OK, when they come out they're pretty cute and we love them unconditionally and all, but up until then, pregnancy is torture for many moms-to-be.

And I'm not the only one of Teigen's fans who can relate to her words of wisdom this week. Many of her followers replied to her tweet with empathy and stories of life-suckers of their own — as well as some, um, theories about the baby.

Many of those who replied to Teigen's tweet appear to be parents themselves. Some shared photos or videos of their little ones, while others simply empathized with her struggle.

Pregnancy does some weird things to you, my friends. I had a "raisin dream" of my own, except my growing human was actually a 300-pound man sitting on my bladder while I begged to be let up to go pee. Oh, pregnancy dreams. So. Much. Fun.

Many Had Answers For Teigen's Burning Question

Many other moms offered up answers to Teigen's question of "why" women put themselves through pregnancy. Of course, considering how adorable little Luna is, I think Teigen already knew that one.

Would you just look at those cheeks? I would have serious baby fever right now if I weren't already through the morning sickness phase.

Along with helpful words of encouragement and adorable babies, followers also offered up a conspiracy theory as a means of explaining Teigen's misery.

Adding some meat to the vampire baby argument, one user dug really deep into the potential hidden meaning in Luna's name. Spooky.

This isn't the first time that Teigen has opened up about the throws of pre-parenthood. While she was pregnant with Luna in late 2015 and early 2016, she shared a number of intimate details about her pregnancy experience. Teigen spoke up about the pain that comes with those adorable little "baby kicks" that sometimes feel more like a cannon going off inside of your body, if we're being honest. Mine hasn't even made it to my ribs yet, but it's nice to know that I have something to look forward to.

Teigen is no stranger to public scrutiny. When the public decided to chime in about her life choices, her food choices, or the number of babies she was carrying, she clapped back at them real quick. In her defense, people have said some bizarre things about her during her pregnancy journeys.

Long story short, Teigen has been keeping it real since Day #1. She doesn't gloss over the messier parts of pregnancy and she doesn't aim to mislead her followers. And I, for one, appreciate her honesty. It's good to know that I'm not the only one less than thrilled about having to split my nutritional intake with my little parasite — I mean baby.