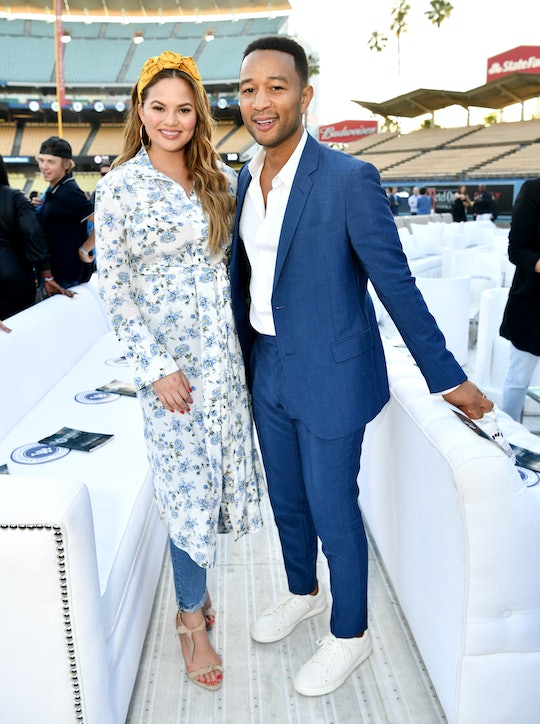 Chrissy Teigen and John Legend's son, Miles, is one cute kid. Teigen has shared some super sweet photos of her son since giving birth to him last month, with every photo getting sweeter and sweeter. Fans can't blame her for sharing these pictures — especially since they're so adorable. Seriously, Chrissy Teigen's newest photo of Miles shows just how much her little boy has grown in the past month and has some fans comparing him to both parents, including Teigen.

People are already pretty aware that Teigen and Legend make some adorable kids. This can be seen in photos of their 2-year-old daughter, Luna, who is so expressive and so precious. So it shouldn't come as a surprise that their son, Miles, is just as cute. Sure, Miles might only be just a month and a few days old (Teigen gave birth to him on May 16, according to Us Weekly) — but in those weeks, fans have been able to see how much Miles has grown since then. Her newest Instagram shows off exactly that.

In the photo, posted to Teigen's Instagram account on Tuesday, Miles looks so big and grown, laying against a pillow with his feet and arms up in the air and his head turned towards the camera. The expression on his face — with his eyebrows furrowed and bottom lip tucked in is a little serious, and gives fans such a good look at all of his features. In case people weren't too aware, Miles is a pretty perfect looking baby and this photo just proves it.

Teigen's fans and followers on Instagram seem to agree with that statement, taking to the comments section to share their thoughts on how adorable Miles is. "What a cutie," one commenter wrote. "He's perfect!," another commenter added. "You make me want to try for another, hopefully a boy!," one hopeful commenter stated.

But the majority of the commenters were marveling over how similar Miles resembles Teigen in the photo. "Your twin," one commenter wrote. "So precious." "This little fellow takes after your side of the family, Chrissy," one commenter stated. "He looks more like you," another commenter observed. "Luna looks more like her daddy." You definitely tell see the resemblance in Mile's face and eyebrows, which look so similar to Teigen's.

But fans weren't saying this a few days ago, when Teigen shared a photo of Miles posing alongside two other members of Legend's family. In that photo fans were definitely able to see how much Miles resembled his dad. But who is to say that Miles can't look like both his mom and his dad? He really is the perfect combination of the both of them.

A year before Teigen's pregnancy with Miles, Legend was already stating that he wanted Teigen to have a "mama's boy," especially since he admitted that Teigen was "a little bit jealous" of Luna's relationship with Legend. "We've got to have a boy, too, so she can feel that same type of feeling."

Becuase of this, Teigen is probably delighted to hear that fans think that Miles looks like her — especially since Teigen has wanted a mama's boy for so long. Teigen told People earlier this year during her pregnancy, that she was excited for her son's arrival, if only for the bond that they might share. Teigen said, according to People:

I'm so excited because Luna is such a daddy's girl. They say that boys just love their mamas. I'm already thinking about how much I'm not going to like his girlfriend.

Now that Miles is here, Teigen has finally gotten what she wished for — a little boy to call her own. But based on the recent photos of him, his resemblance to both parents is an even split.