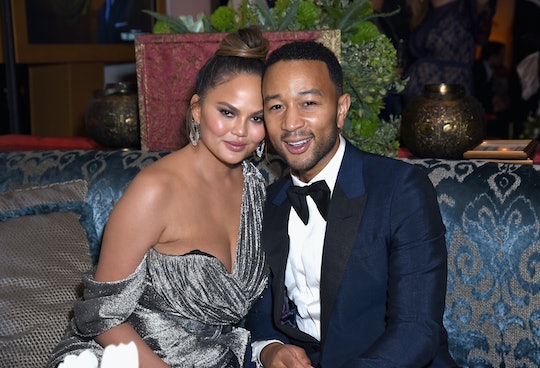 The internet's favorite model-turned-mama is back at it again with the jokes. Showing her affinity for humor yet again, Chrissy Teigen's response to John Legend calling Miles his twin will have you doubled over with laughter. Legend posted his comment on the father-son resemblance on Teigen's Valentine's Day post of their little guy, and what better way is there to celebrate years of love than giving your man a hard time?

Teigen posted the photo to her Instagram on Friday morning, showing 8-month-old Miles Theodore Stephens after his Valentine's Day festivities, looking beyond adorable. "Someone had a wonderful Valentine’s dinner with @alanavanderaa and @chrishimmm!" she captioned the photo, adding, "maybe he will fit into these shoes by next v-day."

As usual, Miles was the spitting image of his dad. Many of the comments pointed out their similarities, writing things like "It really is just incredible how much he resemble his daddy!!! Adorable!" and "He has JOHN LEGEND written across his face!!"

Even Legend himself chimed in to say, "He is me!"

Never one to let an opportunity to poke fun at her husband slip by, Teigen responded: "It's important to cheat with people who look like your husband."

All joking aside, just about every photo of Miles brings about a comparison to his dear old dad. When Teigen shared a photo of Miles back in October to announce he was teething, even celebrities got in on the action of pointing out how much the baby looked like Legend.

"That looks like you face swapped John onto a baby!" Trevor Noah wrote, according to PopSugar. And Lauren Jauregui chimed in to say, "At least there'll never be a tabloid headline questioning the father."

Legend wasn't the only one that Teigen trolled this Valentine's Day, though. After Kanye West surprised Kim Kardashian with an elaborate Valentine's Day layout, including a surprise live performance by Kenny G in their house, Twitter pointed out something a bit strange.

Kenny G was surrounded by vases of roses — literally surrounded. And, as Teigen pointed out in a tweet, there was no apparent exit path for him. "Did Kenny have to stand there while the flowers were being set up? How did he get out? we need more info on Kenny," she wrote.

Others joined in on the joke, suggesting that Kenny was now captive in the Kardashian-West house.

"Kanye West’s gift to [Kim Kardashian] was to capture Kenny G and hold him in a room of their house. He is forbidden from taking breaks and must remain standing, playing his romantic sax. If even a single vase of roses is overturned, an alarm will sound," one person tweeted.

"Kenny G is 100% trapped in the Kardashian/West house and is sending out an SOS with this video," said another.

There's no word yet on how Teigen and Legend spent the rest of their evening on Valentine's Day — aside from dressing Miles up in an adorable little suit and picking on Kim K. But considering they got a couple of babysitters to watch their little one, as her caption indicated, they likely got in some good alone time, which is cause for celebration any parent can tell you.

I doubt that their celebration this year topped V-Day 2017, though. Who can forget the couple's adorable duet that they filmed for the U.K.'s Love Magazine two Valentine's Days ago? In the video, the two of them were lip-syncing along with Legend's 2004 hit love song, "Ordinary People," according to Refinery 29. The love between the two of them is crystal clear as Legend smiles at his singing wife.

I don't know about you, but I'll be watching this video on repeat until next Valentine's Day. Well, that and reading Teigen's crispy 2019 V-day burn. Can you feel the love?