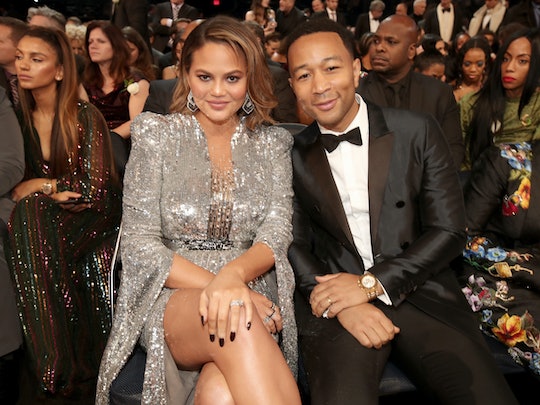 People love to beat up on Chrissy Teigen for every little thing she does. Whether it was taking date nights after giving birth or how she lets Luna play, someone is always going to call her out on something. This time, Chrissy Teigen's response to someone shaming her for carrying Luna is pure Chrissy Teigen, because the comment was that out of line and shows that some people just have nothing better to do but hate on a happy family.

On Instagram, John Legend posted a picture of him carrying baby Luna. It's a cute picture, with her little legs dangling over her dad's arms as they make their way through the city. No big deal. Someone though, felt the need to comment that they were so "tired" of always seeing pictures of Legend and Teigen carrying their baby, who will be 2 in March. "She need no legs then," the commenter wrote.

Teigen decided to fire back at this Instagram troll. She wrote to the person, "Are you so tired of it does it make you so sad and upset?" "What can we do for you to make it better, sweet angel," Teigen added. You can obviously tell that she's being facetious. Because seriously, why the heck does it matter that she and Legend carry their baby? People in the comments went wild for her comeback.

"Mama Chrissy is not here for the foolishness. She got that clapback for ya! I wanna pick up Little Luna too," one person wrote.

Another added, "Adorable picture. Also, I think my daughter is only a few months older than Luna, and I carry her more often than I don't. Would never even thought about that being an issue."

Another person agreed that it was a little much to criticize. "Nothing wrong with carrying a baby in a busy city! I’ve seen plenty of posts where she’s walking," they wrote.

OK, there are just a couple things about all of these arguments for carrying her child. The people who point out that they are in fact in New York City are right — sometimes you gotta keep you little one close. But it doesn't have to be about safety. John Legend and Chrissy Teigen can carry their baby whenever they want for however long they want. Also, I don't know about you, but walking with someone that little is super frustrating. They go so slow! Sometimes the only way to get anywhere is to literally pick them up.

But really it doesn't matter why they're carrying their daughter at all. Look how cute that baby is, wouldn't you just want to keep her close and lug her around all day? Eventually, she'll get so much older and heavier and it will be impossible to carry and they'll miss those days. In a few months, she'll have a little baby brother to compete with, so let this little one get all the rides she can get. Sheesh. On another picture on Teigen's account, another person summed up the whole scenario by writing:

What an extremely strange thing to comment!! That’s their baby girl! Why wouldn’t they carry her?? I carried my babies all over. In this day and age you have to carry your babies close and protect them for example from people like you! Who the heck are you to judge loving parents?! SMH

If they weren't carrying their baby and were letting her walk on the curb or in the street or just weren't holding her hand, the couple would be ridiculed for that, too. Just a few weeks ago, Teigen posted a picture of her going down a slide with her daughter and the commenters lost it about that, too, worried that she would hurt her daughter's legs. It's almost as if people really believe that just because they're famous, they don't know or care about their kids' safety, which is absurd.

It's good that Teigen stands up for herself and lets people know who's boss. Because picking on a mother and father for carrying their kid is just not right.