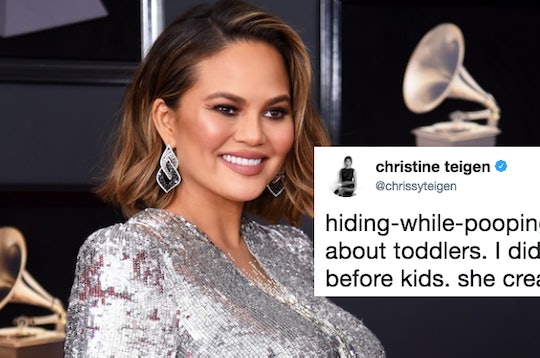 There are so many things that no one adequately prepares you for before becoming a parent. Sure, people will endlessly point out that you won't be sleeping much for the next decade or so. Or that "breast is best," so you better breastfeed that baby *or else.* And of course, seasoned parents will remind expectant couples to "enjoy every minute." But seriously, where are all of the heads-up advice on subjects like pooping? Like the fact that a baby's first bowel movement will literally be the consistency of tar. Or that cleaning up an infant who has pooped up his back and into his own hair will probably happen at some point in time? Well, one celebrity mom is clearly breaking from the norm, as she addresses a truth bomb about toddler defecation. And honestly, Chrissy Teigen's tweet about pooping toddlers and their bizarre bathroom behavior is relatable AF.

On Monday, Teigen took to Twitter to share her thoughts on toddlers and their pooping habits. If you remember, the model mama has one daughter, Luna, who turns 2 in April, and she's currently pregnant with baby number two, a son, according to E! News. "Hiding-while-pooping is my favorite thing about toddlers," Teigen tweeted. "I didn't know it was a thing before kids. she creates a small, gated community or fort and you may not look at or speak to her for 10-15 mins. she will call for you, but it is a trick. you may not look."

Clearly, Teigen is speaking from her experience with Luna when it comes to this whole toddler poop business. But man, so many parents seem to be nodding their heads right along with her — myself included.

Plenty of parents chimed in with the antics of their own children who appreciate a certain sense of privacy while doing their business. One Twitter user wrote, "Both my kids will not poop if I’m in the bathroom. My youngest lets me know he’s done by shouting 'IM A DONE ONION.'"

Another person replied, "We had the 'pooping corner.' All children went there to poop." (OMG, same! Two out of my three kids used the same corner to retreat and discreetly stink up the room.)

Yet another Twitter user commented, "My kid would hide in a picture window, behind all the curtains, not visible to us, yet seen by the rest of the world. Toddler pooping is weird." Amen.

Other parents shared their kids' quirky habits when it comes to going number two. Like how some toddlers try to hide the fact that they're filling their diapers, even though it's incredibly obvious that they are currently pooping themselves. "With a red face and a grunt," another person commented.

"And if you ask if they are pooping the answer will be 'no,'" one parent tweeted.

Even parents of older kids chimed in with frustrating poo tendencies. "When we go [to] restaurants I have to stand outside the bathroom door like a damn bouncer," one parent tweeted.

Truth be told, Chrissy Teigen is one of my favorite celebrity moms. I love that she tells it like it is and doesn't shy away from potty talk. (Because let's face it, 80 percent of parenting involves poop in some form. Not exaggerating.) Like that time when the then brand new mama kicked off motherhood with this epic tweet about postpartum bleeding, as Us Weekly reported.

Or that time when she reminded us that babies/toddlers are basically tiny jerks, according to Redbook Magazine.

And all the times Teigen wasn't afraid of sharing the unglamorous details of her life as a mother.

The bottom line: Parenting is messy and there's a lot of poop involved. So much poop, actually. It's nice to be able to reflect and share in the quirkiness of having to clean up after another person's poop. Tweets from celebrity moms like Teigen also serve as a reality check for soon-to-be parents. (This is what you're getting yourselves into, folks.)

So thanks once again, Chrissy Teigen, for keeping it real — and for allowing your followers the opportunity to bond over toddler poop. Because parenting ain't all rainbows and butterflies.