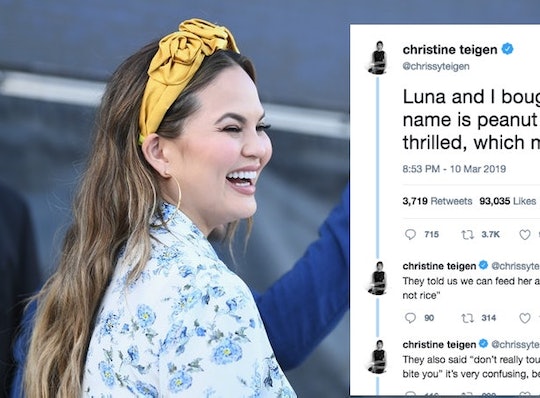 Chrissy Teigen Got A Pet Hamster With Luna & The Whole Thing Has Been...Eventful

There's a new member of the Teigen-Legend family, and its name is Peanut Butter. Over the weekend, Chrissy Teigen tweeted about getting a hamster and took her followers along for the wild ride. But her foray into rodent pet ownership didn't quite go as planned, as she revealed in a series of tweets. And honestly, Teigen's questions about the new addition to her household will speak to any parent who's ever been suckered into getting a hamster.

Late Sunday night, the 33-year-old model revealed that she and Luna purchased the hamster on a whim without running it by husband John Legend first, and he was "not thrilled" about the whole thing. "Luna and I bought a hamster today. Her name is peanut butter. John is not thrilled, which makes me love her more," Teigen's Twitter thread began.

While Teigen initially said that "makes me love [Peanut Butter] more," it wasn't long before she herself seemed to be questioning her decision to purchase the tiny creature. Shortly after announcing the new addition, she revealed in a tweet that she found "being a hamster mom" to be "very confusing," sharing that she was told by the people they bought the hamster from, "'don't really touch her for a week. Then touch her a lot of she'll bite you.'"

Teigen was also a bit in the dark about when and what to feed their new pet, whether she should have purchased a friend for it, and why it was chewing on the cage...

... So Twitter users chimed in with a little advice, as well as stories of their own experience with hamsters.

"I had a hamster when I was 10. Named her Peanut Butter. Her husband, Jelly. She escaped and ran up into our organ. I imagine she lived out the rest of her life 12 days wondering what the f--- that sound was," one follower tweeted Teigen about her own experience owning a pet hamster.

Another wrote that they agreed "on the touching" advice regarding holding a new hamster. "Give them time to adjust and then hold them every day. I was dead set against one and he's actually pretty fun and sweet," they tweeted.

"Get ready for that hamster to break loose, s--- in your shoes, & eat your child's solar system project made of gum drops. RIP Mischief, baddest hamster in the game," a third chimed in.

"Good way to introduce her to death," another follower tweet at Teigen, revealing that her own hamster ate its young. This is, evidently, a common [occurrence], as another Twitter user warned, "Make sure it doesn't get pregnant and eat its babies."

While Teigen hasn't yet experienced the apparent dark side to being a hamster mom, she did reveal in a tweet that her Twitter followers were right about one thing: Hamsters are escape artists.

Hours after she posted a video of Peanut Butter chewing on the bars of its her cage, she tweeted that Luna's new pet "got out," as she was warned it might. The mother-of-two didn't immediately say anymore about Peanut Butter's daring escape, so there's no telling whether she and Legend were able to find it.

Teigen and Legend have always been big pet people. The couple — more so the Lip Sync Battle host — has regularly posted pictures of their dogs on social media. In March 2018, they mourned the death of their dog Puddy, their English bulldog, according to CNN. The pair shared their loss on social media, revealing that they'd had Puddy for 10 years when he died. Teigen remembered him as "the dog that would be there for us through every up, down, new house, new city, new tour, new travel." She and Legend got the dog during their first year as a couple, she shared on social media.

They also had another dog, called Pippa, who was Puddy's "wife" after an adorable pet wedding ceremony, which Teigen shared pictures of in light of his passing. Prior to Puddy's passing, Teigen and Legend got Luna a bulldog puppy called Pepper, according to TODAY. Each of their dogs frequently appears on social media with Luna and 9-month-old Miles.

While I doubt Peanut Butter will ever be quite the social media star Pippa and Pepper are, fans have already enjoyed sharing in Teigen's adventures in owning a hamster. Probably because so many parents out there have had similar experiences with the tiny desert rodents.

Here's hoping Peanut Butter is safely returned to her cage soon, and Teigen's experience with the little critter goes a bit more smoothly than it has been thus far. Speaking from experience, she's in for an interesting ride peppered with escapes.