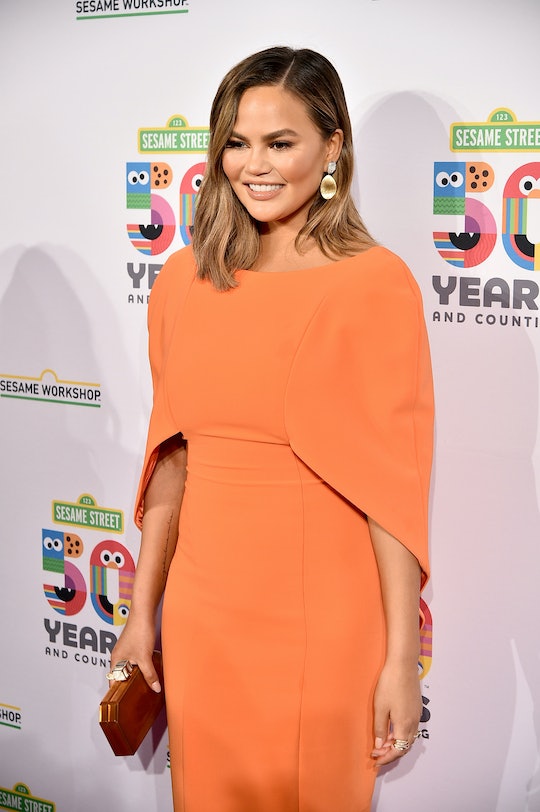 Most of us follow our favorite celebrities on social media. And if it happens to be a star who is comfortable with posting photos of their personal life, then we basically have front-row seats to their family life as well. It's strange, isn't it? Watching children of celebrites grow up from afar. We don't personally know them or their children — and likely never will — and yet it often feels like we do because of all the shared milestones we've witnessed. And honestly, Chrissy Teigen's video of Miles saying his first word will make your ovaries explode.

As E! Online reported, Teigen shared a video of her second child's newest achievement on Thursday, June 20. "When your first word is 'yeah!'" she captioned the Instagram post. Teigen later added in the comments, "Luna’s first word was 'no.' They’re exactly us."

In the clip, 13-month-old Miles can be seen sitting in a high chair next to Teigen's mom, Vilailuck Teigen. His grandma proceeds to quiz the toddler about all the people he loves — including herself, his mom, dad, and Luna. And each time, Miles answers with an adorably enthusiastic "yeah!" (Except he did pause slightly before answering if he loves Luna. Typical little brother.) It's basically the cutest thing. Check out Teigen's little guy for yourself!

And it's not just me. Teigen's followers also think Miles is the most adorable thing. "Omg Chrissy stop I can’t have a baby right now! 😩😩😩," one person wrote. Another Instagram user declared, "I’m gonna die from how cute this is."

Others got a kick out of Miles' pausing before professing his love for big sister Luna, 3. "The slight hesitation before saying he loves Luna - he’s already learning the art of the younger sibling," one person wrote. Another follower commented, "Had to think about Luna for a sec 🤔."

In February, the cookbook author and Lip Sync Battle host shared Miles was "so close" to saying his first word, according to Us Weekly. And she had a babbling video to prove it.

By May, her little guy was saying, "mama," as evident by yet another Instagram video. (What a little sweetie!)

Even though Miles might have said "mama" first, he's actually a mini John Legend. (I mean, just look at him.) In fact, Teigen's comment in her most recent video isn't the first time she and Legend have expressed their youngest child is just like his daddy. During a February appearance on On Air with Ryan Seacrest, Legend shared that he and his son not only look alike, but they act similarly, too. “He has my personality too as far as I can tell,” he said, "He’s very mellow; he smiles a lot; he’s like super easy going; almost never cries — he’s daddy.”

Teigen shared a similar sentiment back in October 2018 during an interview with E! Online. "Miles is so reserved—he's just John," she told the publication. "He's just a cuddly, lovable little ball. He loves the quiet moments. He loves story time. Of her children, Teigen continued:

But Luna was just such a bull. From the moment she came out, you just knew she was going to be such a Luna—just a nutcase. He's not really into anything. He loves sleeping and milk.

Whether or not Miles is ultimately more like his mom or dad, I'm sure everyone can agree: He's one agreeable — and seriously adorable — little guy.