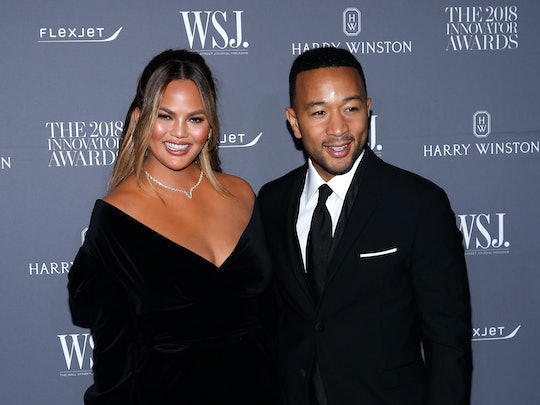 Chrissy Teigen's Video Of Miles Saying "Mama" Is The Most Precious Thing, Ever

Chrissy Teigen and John Legend's son, Miles, quite possibly may be the cutest baby around. Since his birth last year, the little boy is surpassing some major milestones, and fans are here for it. People are loving Chrissy Teigen's video of Miles saying "Mama" which is pretty much the cutest thing, ever.

Miles is just days away from celebrating his first birthday, and it's incredible how quickly time has passed. Almost one year ago exactly, Teigen gave birth to Miles on May 16, 2018, according to Us Weekly, telling her followers the big news on Twitter. This was super exciting for fans, who were so happy for her 3-year-old daughter, Luna, to become a big sister. And in the almost one year since then he has clearly brought so much happiness into everyone's lives. He clearly has brought so much happiness into Teigen's life, as evidenced by the video she posted to Instagram on Monday night.

In the video, Miles can be seen looking straight into the camera, before saying the sweetest phrase that any mother, ever, wants to hear — "Mama." His sweet giggle at the end tops it all off. Hearing Teigen's joy in the background makes the video even better. Go Miles!

Teigen's friends and followers can not get over how sweet her little boy sounds.

"If I had ovaries, they would be melting," one commenter wrote.

"Such a special moment!!," another commenter added.

But most of the commenters can't stop noticing how much Miles looks like his dad — as if she wasn't aware of that already. Everyone knows that Miles is Legend's twin, both in personality and appearances and looks. In October, Teigen explained to E! News how he is taking after his father. "Miles is so reserved — he's just John," she said. "He's just a lovable, little ball." This video pretty much confirms that.

It's just a little unclear if this is Miles' first time saying "Mama" or if he's a seasoned speaker. In February, Teigen told her followers that Miles was so close to saying his first word, according to Us Weekly, but clearly he has made so much progress since then. Talk about one super sweet belated Mother's Day gift.

With Miles' first birthday party just days away, Teigen is doing everything she can to prepare for it. On Twitter, she shared that she is DIY-ing a few of his decorations for the party, and she has now found "something" she's good at. And although Teigen's life might have changed in a major way over the past year, she clearly wouldn't change it for the world. "It's like a big show, but it's fun, because they're both a little kooky," she told Good Housekeeping. "I like the chaos."

That's obvious to everyone. Over the course of the past year, Teigen has been loving being a mom of two. And with children as cute as hers, who wouldn't be loving that kind of chaos?