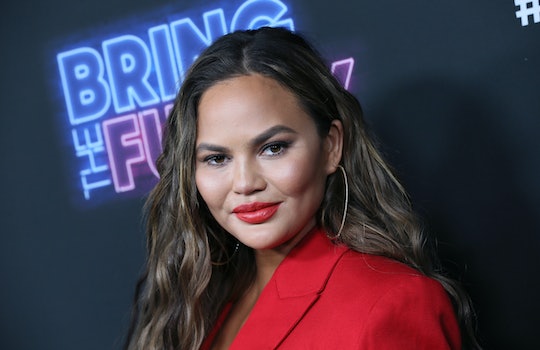 As a parent, few things in life are as rewarding as witnessing your child hit milestones, big or small. From that first smile to rolling over, there's just something so amazing about these incremental victories. And, unsurprisingly, this feeling doesn't diminish if you have more children. Want some proof? Look no further than Chrissy Teigen's video of Miles taking his first "real steps," adorable footage that proves parenting milestones never get old.

In case you've lost track, Teigen and her husband, John Legend, are parents of two adorable little ones: Luna, 3, and Miles, who turned 1 in May. And it looks like their son — who was born three weeks early — recently took his first steps. The Lip Sync Battle host was able to catch the milestone on camera, and she decided to share the video with her Instagram followers on Tuesday, July 23.

"I think I just got his first real steps!" Teigen captioned the clip, which showed Miles toddling from an ottoman (or is it an end table?) to the couch and then back again. You can hear the proud mama encouraging her little guy to go for it, along with her squeals of delight when Miles nails it. “Good job!” she exclaimed. “You took a step! Good job. Go walk, go walk.” Cuteness overload, right?

According to BabyCenter, most babies take their first steps between 9 and 12 months, and are walking pretty well by 14 or 15 months. Some babies, however, don't walk until they're closer to 16 or 17 months. And if your baby was born early (like Miles was) this can affect when they will hit certain milestones.

Chances are, fans of Chrissy Teigen and John Legend have been eagerly waiting for this update for a minute now. That's because both parents have been teasing the milestone for several weeks, with Teigen sharing a July 4 photo of her little guy, writing, “I think someone’s gonna take his first steps in Italy! oh dear."

Two days later, on June 6, Teigen shared a photo of Miles standing up while holding onto an end table. "Soon!!" she captioned the adorable shot.

Legend also talked to Us Weekly about the impending milestone, stating: “It’ll be any day now. He’s, like, flirting with it every day, but he hasn’t fully taken a step on his own.”

Swinging back to the whole Miles is walking thing, the development is a bit wild, isn't it? I don't know about you guys, but it seems like just yesterday that Teigen and Legend brought their baby boy home, so it's mind-blowing to realize he's officially walking! I love hearing how excited his mama is, too. With four kids, I can say that witnessing your child's milestones (especially during the first year) is equally as thrilling, no matter how many kids you've had.

But exciting as Miles learning to walk is, there's a downside too: Teigen and Legend will now have to keep up with two highly-mobile kiddos. Good luck, guys!