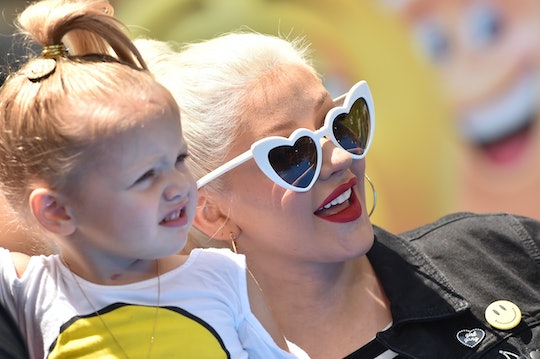 In what turned out to be a full circle moment for every 90s kid and Disney fan alike, Christina Aguilera's daughter was introduced to Mulan over the weekend during a trip to Disneyland. As you may recall, the singer recorded the hit song "Reflection" for the beloved Disney flick 21 years ago and now her young daughter got to meet the princess behind the movie's magic.

More Like This
Kate Middleton & Prince William Just Shared The Most Adorable Video With Their Kids
Exclusive: Teen Artist Tyler Gordon Reveals The “Ultimate Hero” He Wants To Paint
Halle Berry Shared A Beautiful Throwback Pregnancy Photo On Mother’s Day
Queen Elizabeth Has Given Her Royal Approval For A New Line Of Beer

Aguilera, her fiancé Matthew Rutler, their 5-year-old daughter Summer, along with Aguilera's 12-year-old son Max, paid a visit to Disneyland this past weekend, which the singer documented on Instagram. Aguilera took snaps of her Disney-themed sneakers, her daughter playing with bubbles, and just overall super cute family moments. But nothing could top Summer getting to meet Mulan as part of Disney's Lunar New Year celebration.

In a video of the moment that Aguilera shared on Instagram, Mulan asks Summer her name, but the little girl appeared to be a little starstruck and just looked at her mom and then Mulan in awe. Of course, Aguilera recognized the significance of this meeting. "Fun family weekend at Disneyland," she wrote. "Shoutout to Mulan. 20 years later and the movie and its music is so special to us #happiestplace."

The song's lyrics are about putting on a mask to the rest of the world, but wanting your reflection to show who you are inside, a message that's certainly still relevant two decades later. "It's an important message that promotes to live your truth," Aguilera said after a surprise performance of "Reflection" at Disney's D23 Expo in August. "It's all in the lyrics. To live your truth, to show who you are, to be brave, to be a fighter. And now these are messages that I can pass on to my own son and daughter, who are fans of the movie."

Aguilera was 17 years old when she recorded "Reflection", according to People. In 1999, she told Entertainment Weekly that she was asked to tape herself singing a "high E above middle C" (which is a note from the song) and send it over to her manager. Record executives liked what they heard — they immediately flew her out to Los Angeles from Pittsburgh, Pennsylvania, gave her the job on the spot, and she got a recording contract within the next two days. Aguilera joked to Entertainment Weekly at the time that "this is known as the note that changed my life."