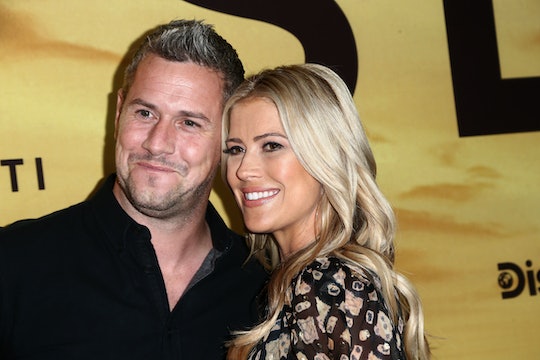 The way a woman gives chooses to approach birth is such a personal decision — and there are so many different factors to take into consideration. Some women know they want to at least try for an all-natural birth. Others like the idea of scheduling an induction. And still others, whether by choice or medical necessity, end up having a C-section. Celebrities are no different. And Christina Anstead's reason for having a scheduled C-section has to do with her previous births.

The Flip or Flop star — who is expecting her third child with husband Ant Anstead — took to Instagram on Friday, Aug. 30 to provide a pregnancy update with her followers, according to E! News. "Well.... Here we go @ant_anstead ... our world is about to get rocked - in all the best ways of course," she captioned bathroom selfie showing off her full-term bump. "One week until my scheduled c-section. I chose to do this because I had an emergency c-section with Brayden and the whole experience and recovery was really hard on me physically and emotionally. I really don't feel comfortable trying to go down that route again."

Not that Anstead was necessarily obligated to defend her choice to have a C-section, but the expecting mama went on to share the circumstances surrounding her previous pregnancy. Apparently, Brayden was just shy of weighting 9 pounds when he was born, according to People. After pushing for "hours and hours," he became stuck and his heart rate was dropping. (Thus the emergency C-section.) Because her third child is also measuring big — based on ultrasound estimates — Christina and Ant decided a scheduled C-section was the best route to go.

"The nursery is ready, the kids are back in school, I’m not sleeping, irritable and uncomfortable," the HGTV star continued. "I’m definitely ready to be done and to meet our little man. One week countdown."

I had inductions scheduled with all four of my children, (I ended up going into labor before one fo the inductions, though.) and I have to say, it was such a huge relief finally having a "finish line" in sight. So I can totally relate to the feelings of being so over pregnancy combined with being ridiculously excited about meeting my baby.

If you lost track, Anstead shares two children — a daughter named Taylor and a son named Brayden — with her ex-husband, Tarek El Moussa. (Ant also has two children from a previous marriage.) It was back in March that she announced she and Ant are expecting their first baby together.

Not long afterward, Tarek accidentally let slip the sex of his ex-wife's third child. “She’s remarried, she’s actually pregnant — everybody knows that,” he told TMZ in April. “She’s having a son.” The Ansteads handled it pretty well, considering. “While Christina and Ant wished they could have shared the news themselves, they are very excited to welcome a baby boy in the fall," a rep for Christina told Us Weekly.

Now that Christina is so close to finally meeting her baby baby, hopefully all has been forgiven. I can't wait to see pictures of baby Anstead in a week or so!