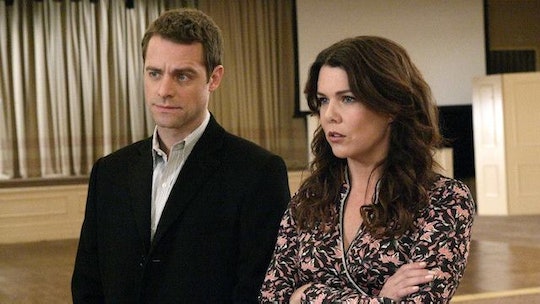 (Warning: This post contains spoilers from Episode 4 of the Gilmore Girls revival.) When fans found out Rory's dad, Christopher, would be in the revival there were a lot of mixed reactions. Some were afraid he'd ruin Lorelai and Luke's relationship (again), some were upset Christopher was in the revival period, and others didn't care either way. Christopher didn't have a big role in the revival and actually only appears in one scene in the last episode, "Fall." However, Christopher's one scene in the Gilmore Girls revival may have had more meaning than the fans first realized.

Although most fans tend to zero in on Christopher and Lorelai's romantic relationship, it's the father-daughter relationship between Christopher and Rory that's always really kept Christopher around. Well, when he chose to be around anyway. When Lorelai got pregnant at 16, both her parents and Christopher's parents wanted the two to get married and Christopher was on board. However, Lorelai being who she is didn't want to be forced into a marriage just because of one change in her life. So, Lorelai went at it alone, eventually leaving her parent's house and moving to Stars Hollow to raise Rory... solo. Though Christopher floated in and out of their lives and did start to make more of an effort to be there for Rory in the later seasons, it was really Lorelai who made Rory into the woman she is today.

Fast forward to the revival and Rory decided to pay her dad a visit, seemingly just to tell him Lorelai and Luke were (finally!) getting married and to make sure Christopher had no intention of crashing the event. However, once they moved past that, it seemed Rory also had another reason for her visit. After telling him she was working on a book about herself and Lorelai, she asked Christopher how he felt about Lorelai raising her all on her own.

Though he was wounded by the question at first, he answered honestly and explained that it was Lorelai's choice, but he did let her do it. Still, overall, he believed it was the right thing to do.

"I think it was exactly what was supposed to happen," Christopher told Rory. "And I think [Lorelai] would back me up on that."

In the moment it seemed like Rory was just asking these questions because of her book but after hearing the last four words it seems more likely that Rory was asking these questions for herself. Why? Because as we learned, those final four words revealed that Rory was now pregnant. And, chances are she'll be going at it alone, too. She broke things off with Logan, a likely father to the baby. Things might just have come full circle for the Gilmores, which could be why Rory was asking about her father's side of her life... It applies to her more than she ever knew.