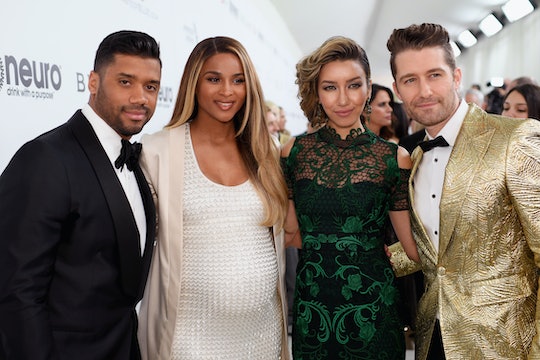 Ciara Gives Birth To Baby No. 2!

In October, Ciara and husband Russell Wilson, quarterback for the Seattle Seahawks, announced they were expecting their first child together. Now the day has finally arrived for the Wilson family! On Friday evening, Ciara gave birth to baby number two, and though fans have yet to see her photo, it's a guarantee that the little girl is the cutest bundle of joy — not to mention the fact that her name is just about the most beautiful thing ever.

The singer announced the news on her Instagram early Saturday morning, just after midnight. "Dear Sienna Princess Wilson, No matter how big the wave, we will always be your calm in the storm," she wrote. "We Love You. Love, Mommy & Daddy." The mother of two added her daughter's time of arrival and birth weight as well ("7:03 pm 7 lbs 13 oz") and noted that Wilson had snapped the corresponding photo, a picture of Ciara on the beach kneeling in the sand. "Photo By Daddy," she wrote, tagging the photo with a heart emoji.

Ciara and Wilson tied the know in July of last year. The couple had been dating for less than a year before the NFL star popped the question while on vacation in the Seychelles, according to Us Weekly. They married in an intimate ceremony in England.

With the arrival of little Sienna, the Wilson family has become a family of four. The adorable newborn is the second child for Ciara, who is mom to 2-year-old son Future Zahir with ex-fiancé, rapper Future.

Just days before giving birth, Ciara posted a series of flawless photos on Instagram that had fans wondering if Baby Wilson would here soon, according to Essence. In the pictures, the "Goodies" singer is shown wearing a form-fitting black dress and new Gucci platform sneakers. In one post, Ciara squats down low; that photo is captioned, "Mama Can Still Drop It Low..."

Of course, who's surprised that Ciara can drop it low? This is the same singer who performed a choreographed dance to Whitney Houston's "I'm Every Woman," which she posted to her Instagram account in February. A visibly pregnant Ciara moves through the routine effortlessly; at one point, she even jumps on her couch at one point. I can't lie, it was an amazing performance.

Congratulations to Ciara and Wilson on the birth of their daughter Sienna Princess! With a name like that, and two equally flawless parents, the little one is definitely royalty.