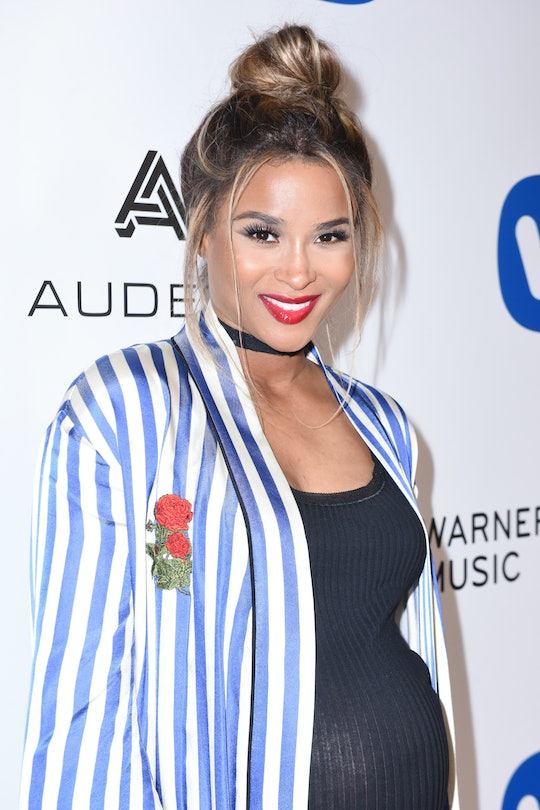 Ciara is probably expecting her second child (her first with husband Russell Wilson, who plays for the Seattle Seahawks) any day now. From working through some co-parenting issues with her ex, Future, and raising their child Future Zahir, Ciara appears to know exactly what she's doing as she awaits the arrival of her next bundle of adorable joy. And these quotes from Ciara about parenting prove it.

The singer announced that she was pregnant earlier this fall and just this week hinted that she might be having a boy. After the Grammys, she posted an Instagram photo of herself wearing a striped blue blazer. "Blue is one of my favorite colors..." she captioned the image. Unsurprisingly, fans were subsequently convinced that it was Ciara's sneaky way of saying the new arrival would be 2-year-old Future's younger bro.

Recently, at the American Music Awards, the 31-year-old said that it took some time to get used to being pregnant again, but as she told E! News on the red carpet, she was feeling great. "I’m feeling great. I’m feeling awesome, actually. Finally getting to a place where I feel almost normal," Ciara said. "It was a bit of a ‘I don’t want to throw up, but I don’t feel regular.’ I’m in between. That’s almost worse. You’d rather just throw up and get it done!”

Pregnancy is never a breeze and neither is parenting, but Ciara seems to have a handle on it. Take a look at some of her best parenting tidbits to see how she does it:

Just Roll With It

In an interview with Parents, Ciara explained,

I haven't gotten any bad parenting advice, but the main thing I've been told, and learned, is to go with the flow. No one has all of the answers, so you see what works for you and your child and it'll all work itself out.

On Focusing On Her Son & Leaving Everything Else Alone

In an interview with CBS, referring to some of the family issues that had arisen in her relationship with ex-fiancé Future, Ciara said,

It's a bit of a double standard [for ex-fiancé Future to say she shouldn't bring now-husband Wilson around her son]. When we were together, I took care of Future's kids as well at a very young time in our relationship. I don't know what more [haters] would expect me to do than just live my life. That's what I'm doing and my son is the most important.

In the aforementioned Parents interview, Ciara joked about accepting the messy realities of parenting:

It's all about the snot. I don't care if I use my hands or fingers to wipe his nose, I'm really just not fazed by it at all anymore. I'll get all up in there and clean his nose out, and sometimes that surprises people, but I really just don't care!

On Learning From Her Son

Ciara talked about her son's eating habits with Parents as well, noting that she wasn't about forcing anything:

I want him to try things, but not too much! I'm a bit of a picky eater myself (no tomatoes!) so I don't want him to pick that up. So whatever he tries, mom tries too!

In a sweet Instagram pic last year, with son Future's diapered and pajama'd bottom smashed against the side of her face, Ciara jokingly wrote,

Ciara and Wilson were married last summer in England at an actual castle and then announced their good news in October. Already, along with her ex, the couple have been co-parenting little Future Zahir, and doing it well — so they should be ready for baby number two. And given Ciara's laid back, go-with-the-flow attitude, she's definitely ready for the next chapter.