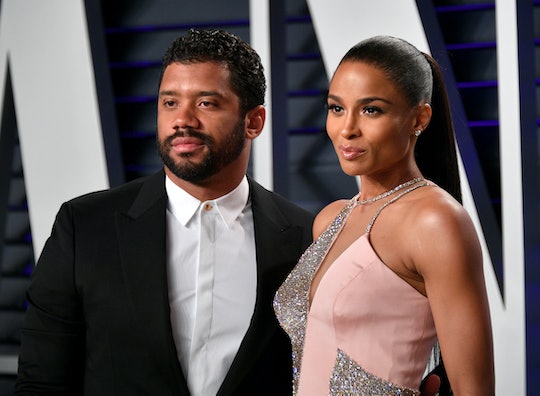 Ciara's relationship with her fans is one unlike any other. The singer and mom of two isn't afraid to share bits of her life with them. And their relationship got a lot more intimate this week when Ciara released her new music video for her new song, "Beauty Marks." In the music video, Ciara shares footage of herself giving birth and it's such an emotional moment that is definitely worth watching.

If people felt as if they didn't know much about Ciara, then the music video for "Beauty Marks" will make people get to know her more. The music video revolves around her relationship with her husband, football player Russell Wilson, and how he loves her for all of her "beauty marks". The couple married in July 2016 in an English castle, according to People, and three months later, she announced that she was expecting their first child together. This new music video, released over the weekend, takes fans on this journey through their love story with brand new footage.

The music video opens up with Ciara and Wilson standing at the altar on their wedding day and shows more footage from the wedding as the song goes on. But it gets even better — the video shows Ciara giving birth to their daughter, Sienna Princess, which was taken in April 2017. The footage doesn't hold anything back. Fans are able to witness the exact moment that Ciara gives birth and hear all of the emotions associated with it. She can even be heard singing her daughter "Happy Birthday" once she is placed in her arms for the first time. Cue the tears.

The entire music video, which was directed by the singer herself, is a six minute emotional journey. And every single second of it is beautiful.

The music video also has a lot of footage featuring Ciara's 4-year-old son from a previous relationship, Future Zahir, who steals the show every time he and his adorable self are on screen. It's rare to see a celebrity so willing to share these super special moments from her life with her fans. And this could be why this video is resonating with so many people. Over the past two days, the video has started trending on YouTube, amassed over 1 million views, and has had people commenting like crazy.

"Absolutely the most beautiful video I've ever seen," one commenter wrote. "So true and raw."

"This is how every woman dresses and wants to be loved!," another commenter added.

It's so fitting that Ciara released this music video just in time for Mother's Day. If anything, this video highlights why being a mom is so special to her.

During an appearance on The View last week, Ciara opened up about why she was so willing to share these intimate moments from her life with her fans. "The moments are real," she said. "The journey that I've gone on in my life is real. It's real and it was the best way to tell my story."

Ciara echoed these thoughts to Entertainment Weekly. "These moments sum up the journey of my life; I'm smarter, stronger, and wiser because of them," she said. It makes sense why Ciara would be inspired to write this song, especially since she revealed to Entertainment Weekly that she was breastfeeding Sienna when she wrote the song.

You can see and hear the emotion throughout the video for "Beauty Marks." It's not only a highlight reel of her relationship with Wilson, but a touching ode to her two super adorable kids. What isn't to love about it?