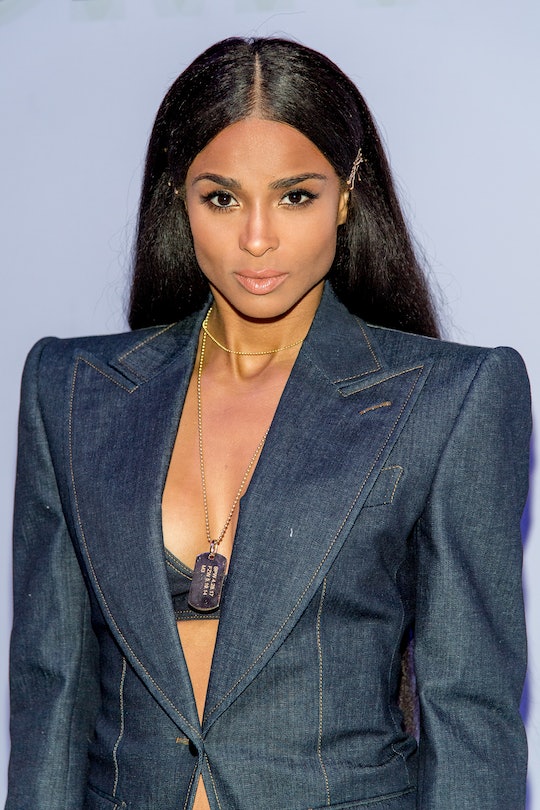 Ciara Shares The First Photos Of Her Baby Girl & 9-Month-Old Sienna Is So, So Adorable

Ciara has made a name for herself in music, in fashion, and as a devoted mother as well. On Feb. 15, Ciara shared the first photos of her baby girl, Sienna, and her daughter is beyond adorable. Hollywood seems to be in the middle of a baby boom and it's cuteness overload right now, thanks to this latest batch of baby pics.

Sienna Princess Wilson is Ciara's second child, but her first with husband Russell Wilson, whom she married in July 2016, according to E! News. Little Sienna was born on April 28, 2017 and the announcement was made via Instagram. At the time, Wilson, who's a quarterback for the Seattle Seahawks, wrote, "Dear Sienna Princess Wilson, No matter how big the wave, we will always be your calm in the storm. We Love You. Love, Daddy & Mommy." The post also had the time of birth listed as 7:03 p.m. local time and Sienna's birth weight, which was 7 lbs. 13 oz.

On Thursday, Ciara gave fans a glimpse into her home life with a sweet photo of baby Sienna while helping promote her husband by posting the pics on his new app called TraceMe, which aims to "bring super fans closer to what they love." Clearly, Ciara fans got a taste of this today when they finally got to meet 9-month-old Sienna, getting an inside look at Ciara's life as a mom.

Ciara also shares a son, Future Zahir Wilburn, with rapper Future, according to E! News. She and Future were engaged in October 2013 and they broke off their engagement by August 2014, just three months after their baby boy's birth.

As Ciara posted photos of her baby girl Sienna on her husband's TraceMe app, along with her Instagram account, Ciara's husband, Wilson, did as well. In the below Instagram video, Ciara gave fans an inside look at how she makes music, does business and juggles her family life. She also gives fans a behind-the-scenes look at her children.

According to E! News, Ciara is overjoyed about sharing her life with her fans in this new way, explaining:

I'm so excited to be opening up my world to you on TraceMe. You guys know that I tend to be private with a lot of things, but with TraceMe I can have a genuine, unfiltered connection with you all. My motivation for this was to give back for all of your support throughout the years. We now have a special place where you can get to know more about me, and see all the fun things that go on with my music, my family, my fashion, and so much more.

This is the first time Ciara has shared a full-faced photo of her daughter since she was born nearly 10 months ago. In sharing the photo, Ciara wrote on Instagram:

Today is just the beginning, I’m sharing something near and dear to my heart with you ... meet my baby girl.

With the post, fans are so excited to finally see little Sienna. In response to the pics, one commenter wrote, "Yes! I need more she is lovely give me more please." Another fan posted a message that stated, "Thank you for sharing YOUR life with us!! She’s a big baby congratulations to you and your family again!!"

Several fans commented on how long they've been waiting to see a photo of the little one. Well, now they've gotten what they wanted, right?

It sounds like Ciara is just starting to share photos of her little one online, since she wrote, "Today is just the beginning." So, fans will hopefully get to see more and more adorable pics as Sienna continues to grow.