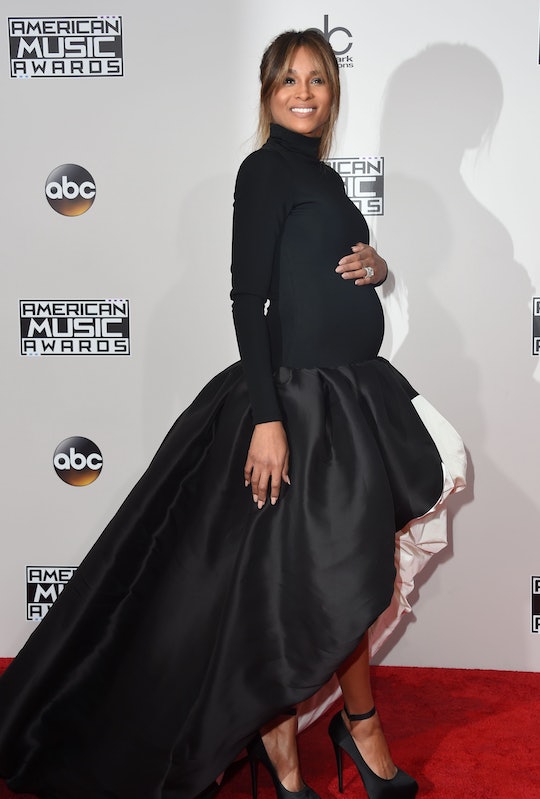 Ciara is definitely a lucky woman. The singer is currently pregnant with her second child and her husband, Seattle Seahawks football player Russell Wilson, made it to the NFL divisional playoffs with his team. Yes, Ciara is living a pretty good life right now and that could not be more clear on her various social media channels. In her newest social media post, Ciara showed off her baby bump in her latest Instagram and her son — and baby bump — are seriously so cute.

On Saturday, Ciara shared a photo of herself and her son (and that sweet, impending bundle of joy) before Wilson's team played the Atlanta Falcons. In the photo, Ciara is seen smiling widely, looking radiant, and showing off her baby bump in her Seahawks jersey. Ciara's son, Future Jr., whom she had with her ex, rapper Future, smiles just as big as his mom, looking ridiculously cute in his own Seahawks jersey, matching sneakers, and holding a toy (which appears to be some sort of robot-dinosaur, right on, little dude).

The family simply couldn't look happier — and even though Wilson's team ended up losing, Ciara's caption says it all: A simple heart emoji in the caption shows that there plenty of love to go around between Ciara and her "team."

After Wilson's team lost to the Falcons (therefore booting them from the NFL playoffs), Wilson, rather than getting too hung up on the defeat, turned to Instagram where he shared some of his love for Ciara and her little ones:

I will forever win because I get to come home to you every night. The love of my life. I love you. This past year has been full of so much joy & happiness. From getting married to having our little one on the way, to your endless constant love. I couldn't be more grateful to have you in my life Mrs. Wilson. You make every day a perfect day. #ForeverGrateful

In a post later in the day, after the game was over, Ciara shared another heartwarming photo, writing in the caption, "No Greater Blessing Than Having A Family. We're Proud Of You (Wilson)."

Ciara first announced her second pregnancy back in October; In November, she told E! News that she was feeling "great."

"I'm feeling great. I'm feeling awesome, actually," she said. "Finally getting to a place where I feel almost normal. It was a bit of a 'I don't want to throw up but I don't feel regular,' for awhile."

Ciara must be feeling even better these days — it definitely shows in her latest Instagram posts.