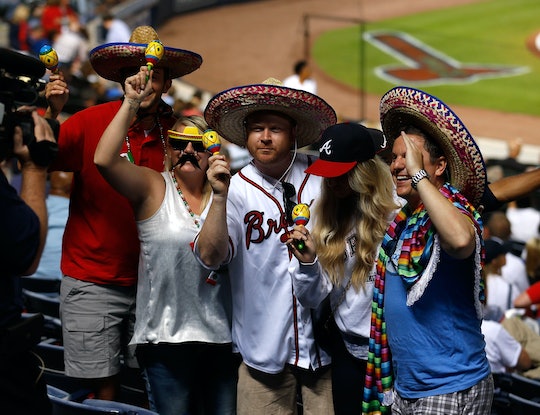 We're less than a week away from Cinco de Mayo, the May day celebration in which Mexicans celebrate their country's defeat of France in the 1862 Battle of Pueblo and in which Americans pay tribute to the Mexican stereotypes they know and love. As people across the United States prepare to don sombreros and purchase mass quantities of tacos, tequila, and margarita mix, they're revving up to the holiday with some good old-fashioned Cinco de Mayo memes. That's both good and bad news.

Memes might seem like lighthearted fun, but they also reveal (sometimes unintentionally) a great showcase of cultural stereotyping, and serve as a frank reminder that many Americans don't understand Mexican culture — or, more broadly, Latin culture. (In my seven years in the United States, my Dominican background has brought up a remarkable amount of taco and tequila jokes, despite the two countries being very distinct.)

Think of it this way: If it at all bothers you when foreigners distill the United States down to guns, George W. Bush, and fast food, that's how many Mexicans will feel when they see Cinco de Mayo celebrations rife with donkey piñatas and sombreros. You might amuse some, but you'll offend others. Some Mexicans might find the representation funny, but others might assume that you're just a bit culturally ignorant.

These memes perfectly demonstrate why you may want to reconsider your plans for Cinco de Mayo, in favor of something a little more culturally sensitive:

If All You Associate Mexico With Is Tequila & Tacos, Maybe Don't Celebrate Cinco De Mayo

If You Think Cinco de Mayo Is Mexico's Independence Day, You Shouldn't Be Celebrating It

It's Not The Day Of The Dead, Either

These Memes Actually Get It Right

Celebrating without actually knowing what or who you're celebrating just rings a bit hollow. I'm not suggesting that everyone pretend Cinco de Mayo isn't happening — and who doesn't like an excuse for a fun night of unwinding? I'm sure there's plenty of Mexican people who will feel the same way. But if all you're after is a good excuse for a drink and a night out, it'll be much less offensive if you actually know more than a few overused stereotypes about the holiday and the country that celebrates it.

This year, maybe leave the sombrero and traditional dress at home. Get to know a bit about Mexico's history, hit up an actual Mexican restaurant instead of a Chipotle, and try a michelada. (Even better? Book yourself a trip to Mexico, because you'll have way more fun than simply eating and imbibing at your local Cinco de Mayo party.)