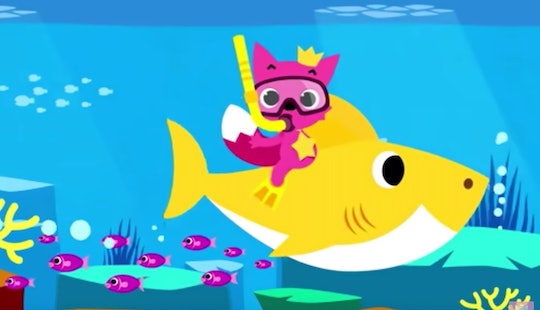 City's Use Of "Baby Shark" To Address Homelessness Sparks Outrage

If you're a parent with young kids, chances are you're probably familiar with the viral children's song, "Baby Shark." It's wildly popular, annoyingly catchy, and beloved by kids. But for parents? Songs like this are often the bane of their existence, especially when little ones insist on listening to these tunes on repeat for weeks at a time. It can take all of a person's willpower not to end the torture by chucking that tablet out the window, which is just one reason why this city's use of "Baby Shark" to address homelessness has sparked outrage.

The city of West Palm Beach, Florida, has taken a controversial approach when it comes to deterring people experiencing homelessness from sleeping on its Lake Pavilion patio. Because as The Palm Beach Post reported, the city is now playing "Baby Shark" and "It's Raining Tacos" via rooftop speakers in protective metal casings. On repeat. All night long.

The city of West Palm Beach did not immediately respond to Romper’s request for comment regarding the initiative.

Apparently, an increasing number of people experiencing homelessness have been sleeping on the pavilion's patio — which happens to be a go-to spot for weddings, graduations parties, birthdays, bar mitzvahs, business meetings, and more, according to NBC. A total of 164 events occurred at the venue from June 1, 2018 through June 30, 2019, and is expected to bring in $240,000 from them this fiscal year, as the outlet noted.

Given the venue's popularity, the city recently decided to address the issue. “People are paying a lot of money to use the facility,” Leah Rockwell, Parks and Recreation director, told The Palm Beach Post. “Thousands of dollars. We want to make sure people paying this money had a facility that was clean and open and continue to use it in the future.”

According to the publication, the city is working towards having set opening and closing hours for the park — which would make it easier to enforce trespassing laws. In the meantime, the annoying music appears to be serving its intended purpose.

“It has been effective and is a temporary measure to make the area accessible for those who have rented the facility and for future events," Rockwell told The Palm Beach Post. "We are not forcing individuals to stay on the patio of the pavilion to listen to the music. The music is heard only if you are on the patio, a very small area relative to the rest of the waterfront.”

Megan Hustings, interim director of the National Coalition for the Homeless, is not impressed with the tactic, however. The practice "shows a lack of concern for our community members who are struggling through a very tough time, Hustings told CNN. "Responding with this kind of discrimination and disgust instead of compassion is ... really immoral. It's disturbing... We're all humans, and we need to sleep."

Twitter has strong feelings about the strategy as well. One user wrote, "How about helping them instead of driving them crazy with music? Aren't their lives hard enough as it is?"

Another Twitter user commented, "Where have I heard of this cruel tactic before? Oh yeah: GUANTANAMO BAY."

Someone else chimed in with, "Fire anyone who took part in this and use their salaries to build affordable housing or a shelter."

Yet another Twitter user wrote, "Cities need to address the problem of homelessness instead of trying to drive homeless people out so they become another city’s concern. Homeless people have to sleep somewhere. It’s inevitable."

*Giant sigh* On one hand, this reminds me of parks installing devices that emit high-frequency sounds only teenagers can hear to deter loitering and vandalism. On the other hand? There's a big difference between playing annoying sounds so teens won't loiter around versus playing mind-numbingly obnoxious music to discourage people who are experiencing homelessness from sleeping on a pavilion. And I think many would agree that there are better ways to address this issue because every person, no matter their housing situation, deserves respect.