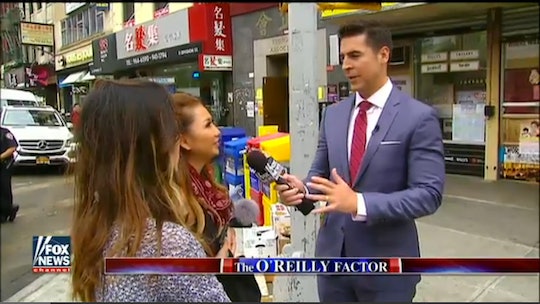 Ask anyone you know and they will tell you that the 2016 presidential election is getting kind of ridiculous. Between the debates and the Donald Trump Twitter wars — it can oftentimes feel like this political election is getting out of hand. But just because the candidates might be ridiculous at times does not mean the coverage surrounding the election has to reflect that. This week, several civil rights groups claimed that Jesse Watters' "Asian" segment, which aired on Fox News' The O'Reilly Factor, was was offensive — and they're not wrong.

The segment isn't worth watching unless people are in the mood to become upset — so I'll spare you the gory details and do my best to describe the events that take place in the video. (If you're still curious, the video can be watched here.) In the most recent debate, China was mentioned 12 times, according to The O'Reilly Factor host, Bill O'Reilly. This inspired Watter's World host and correspondent Jesse Watters to go to Chinatown in New York City to "find out what folks think about the 2016" election and tape his own man-on-the-street segment for the evening show.

In the video, Watters interacts with various people in Chinatown, asking them questions about Trump and a bevy of other current political issues — and though many claimed his questions weren't controversial, the interviews were nonetheless negative and offensive in the worst way possible. Watters spoke with a few people that appeared to not speak English (or simply didn't want to be interviewed by him), and at one point, as the correspondent was being lectured by a man about pronouncing certain Chinese words correctly, Watters seemed to treat both the man and the situation as a joke. Watters also managed to ask a street vendor if his items were stolen ("Are these hot?" he says); attempts karate after asking a man on the street if he knows karate; asks for special herbs for "performance," asks a random man if it's "the year of the dragon [or] rabbit"; and compares two young women to giggling schoolgirls, playing a stereotypically offensive clip after they laugh at one of his comments.

As if the video wasn't bad enough, O'Reilly himself seems impressed later, after watching the segment, that the people in Chinatown are "aware" of current events and political figures. "People say it's very insulated and they don't interact with American politics, but it looked like everyone knew what was going on," he said.

Several civil rights groups, on the other hand, weren't pleased. According to NBC News, groups such as the Asian American Journalists Association as well as four organizations that are a part of the Asian Americans Advancing Justice affiliation expressed their distaste for the segment and criticized how it perpetuated unfair stereotypes. The organization Asian Americans Advancing Justice affiliation released this statement in response to the segment:

It is unconscionable that a news organization would sanction a segment that laughs at a community of people, including Watters ridiculing elderly Chinese Americans who were limited English proficient. Although The O'Reilly Factor may believe this was "all in good fun," this segment does nothing more than play up every offensive stereotype that Asian Americans that the community has fought against for decades. What they should have done was talk about the important role that Asian Americans can play in this election.

According to Politico, the Asian American Journalists Association also released a response to the segment which they called "rude, offensive, mocking, derogatory, and damaging":

It's 2016. We should be far beyond tired, racist stereotypes and targeting an ethnic group for humiliation and objectification on a basis of their race. Sadly, Fox News proves it has a long way to go in reporting on communities of color in a respectful and fair manner. Fox missed a real opportunity to investigate the Asian American vote, a topic not often covered in mainstream news.

They're not wrong: The segment takes a critical group of voters in this election and portrays them as a stereotype rather than who they are. Just because this election might seem like a "joke" at times — it does not mean that news programs have to mimic that and turn serious issues into a parody.

For his part, Watters took to Twitter to defend his segment:

In this election, every statement and interview matters. While there are certain things airing on television that can be perceived as "tongue-in-cheek," or are okay to poke fun at, a person's ethnicity should not be one of those things.