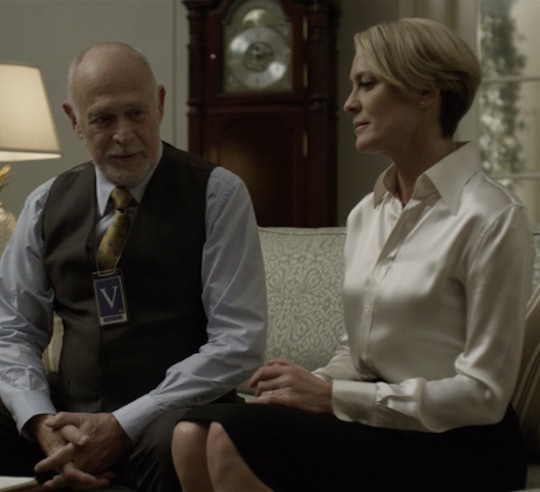 Claire Underwood and Remy Dalton are back and better than ever in Season 4, and they're not the only ones. (If you don't want this season spoiled for you, then stop reading now because spoilers abound!) After the attempt on Frank Underwood's life, Vice President Donald Blythe steps in as acting president and becomes a pawn played by the ultimate puppeteer. Claire enlists the help of Raymond Tusk to help with the Russia/China/U.S. oil crisis, and if earlier seasons of House of Cards have taught us anything, it's this: Raymond Tusk is someone so dangerous and devious that he makes Frank Underwood's role in the government look like amateur hour. So what gives, Claire? Why Tusk, and more importantly, why now?

Here's what you need to know about Tusk: he's a billionaire who owns several nuclear power plants. He's also one of former President Garrett Walker's BFFs, and he and Frank have had a very rough, very rocky past. If you remember, Walker sent Underwood to spend the weekend with Tusk to be vetted by the billionaire, and when Frank realized what Walker was up to, he was none too pleased. Then, before Walker had stepped down and Underwood became president, Tusk was entrusted to arrange a "back channel" that allowed for an open, honest flow of wants and needs during the China-U.S. trade summit. Underwood and Tusk were supposed to work together to ensure that the free flow of information took place well outside of the public setting and that no one caught wind of what was happening. Of course, that all fell apart. When Frank caught wind of Tusk's back-door dealings, he decided, as Frank Underwood is known to do, not to play along.

And though that's where the trouble began, consider it a warmup act to the sh*t about to go down in Season 4.

Remy, by way of Claire, finds Tusk in the woods somewhere, and by way of some serious poking, prodding, and negotiation, Remy enlists Tusk's help by threatening to bring formal charges against him for money laundering. The long and short of it is this: President Underwood, though unconscious, has a huge oil crisis on his hands that's now involved both Russia and China. Costs for gas are sky high, voters are pissed, and it's ruining Frank's campaign.

When Remy and Tusk show up at the White House, the First Lady feigns surprise at not only the sight of the two men, but their proposal, as the scene lays out, includes creating a partnership between energy companies. We don't know the specifics quite yet at the end of the episode, and maybe that's for the best.

Everything we know about Tusk tells us that his back-door dealings serve one purpose: to better himself and his business, and it doesn't take a genius to realize that teaming up with Claire Underwood and Remy Dalton obviously stands to benefit him in some way. Otherwise, I'm guessing he absolutely wouldn't do it. He doesn't care about democracy or all the little people. For Tusk, it's all about me. (Well, him, but you get what I was going for.) The move to get Tusk's help is dangerous and ballsy, but it's one that Claire Underwood wouldn't make if she didn't have a larger plan hidden somewhere up her perfectly tailored and crips designer sleeve.

Whatever Tusk is up to, there's no doubt that the Underwoods will rebound quickly, but frankly, I'm a little nervous to see how this is going to play out. With Frank's health in limbo, Doug Stamper on the verge of losing it, and Claire Underwood at the helm of a very confused and adorable Donald Blythe ship, the remainder of Season 4 is about to get even more intense. And I can't wait to see how much more Raymond Tusk complicates that.