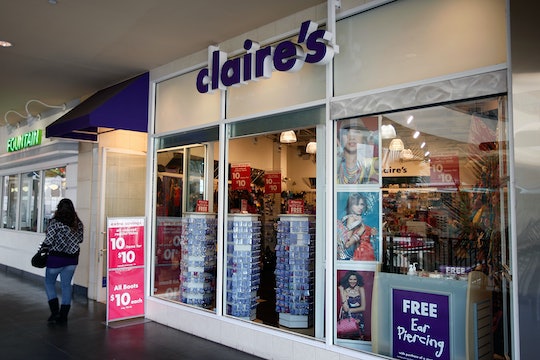 A lot of us can remember the first time we tried on makeup for the first time — whether it was for a dance recital, Halloween, or wanting to emulate your mom or favorite celebrity. Putting on makeup (even pretend makeup) is a cornerstone for children. But before children go ahead and put it on their face for the holidays, parents might want to make a note that children's accessory store, Claire's is removing some children's makeup kits from its stores after they reportedly tested positive for asbestos.

We are pleased to report that test results received to date from two certified independent labs confirm that the products in question are asbestos free, completely safe and meet all government requirements. As we said previously, we also confirmed that the talc ingredient that is used in the cosmetics was sourced from Merck KGaA and is asbestos free. Any report that suggests that the products are not safe is totally false.

We have shared with Health Canada and the U.S. Food and Drug Administration the certificates of analysis provided by Merck, and plan to share with those agencies the results of the testing being conducted by the independent labs.

Furthermore, we dispute the findings and testing methods of Sean Fitzgerald, the Director of Research and Analytical Services for Scientific Analytical Institute (SAI), which was asked to do the testing by a personal injury law firm. We only learned of the claims after they went to the press. We have made multiple requests for Mr. Fitzgerald’s detailed test data, but it has not been provided to us. Mr. Fitzgerald also went to the press in July with claims that testing of cosmetics from Justice showed evidence of asbestos, which Justice refuted after analysis of a third-party ISO-certified testing lab.

Claire’s® is one of the world’s leading specialty retailers of fashionable jewelry and accessories for young women, teens, tweens and kids and we pride ourselves in providing our customers with quality products that we stand by. Our paramount concern is the safety of our customers and we apologize for any distress these false reports may have caused. We thank customers for being patient with us as we sought the truth in this matter. We will continue to honor returns from any customers remaining uncomfortable.

Previously: The retailer, which filled your childhood with jewelry and novelty items is reportedly pulling several makeup kits from its store shelves after select makeup kits reportedly tested positively for asbestos, according to Arizona ABC News affiliate, ABC 15. The testing was reportedly done independently by a law firm and tested in a North Carolina lab which confirmed the makeup tested for tremolite asbestos, according to Rhode Island news station, WPRI 12. The lab tested 17 samples of makeup from Claire's stores in nine different states, according WPRI, including "eyeshadows, blushes, and compact powders" which reportedly tested positive at "alarming rates."

Claire's issued a statement on Twitter on Saturday after the results of the investigation were published. "At Claire's, the safety of our customers is of paramount importance, and we are passionate about the safety and integrity of our products," Claire's said in the statement. "We work closely with our vendors to ensure our products are tested and assessed in line with the relevant country guidelines and regulations."

However, Claire's did not clarify in its statement which products were being pulled or investigated and Romper has reached out for clarification. It is also important to mention, according to ABC 15, Claire's has not placed an official recall on the impacted products but its stores have stopped selling the products. But, you might want to make a note about the affected products, due to the timing of the holidays. With friends and family gifting your child presents, you might want to take a closer look and see if they are among the reportedly affected products. Claire's told WPRI that if parents have any of the makeup products in their home and they are "uncomfortable about using" them, they can return them to a Claire's store for a full refund.

The impacted products, according to ABC 15, reportedly include:

The asbestos testing can be attributed to a concerned parent. Providence, Rhode Island mother Kristina Warner placed a test for asbestos on her 6-year-old daughter's Aqua Glitter Kit that was purchased for a ballet costume, according to The Providence Journal. Warner routinely places tests for asbestos for her job at a law firm. Warner told NBC 10 that receiving the news that the makeup tested positively was "heartbreaking." "I physically sank," Warner told the outlet. "I ended up sitting on the ground, just trying to wrap my head around how something like that could end up in our home."

Sean Fitzgerald, the director of research at the Scientific Analytical Institute in North Carolina, which tested the products for asbestos, told the Providence Journal that the amount of asbestos fibers measured in the makeup was a "clear hazard."

Asbestos exposure is understandably scary. When products that contain asbestos are disturbed, the fibers are released into the air and can be inhaled, according to the National Cancer Institute. And once the fibers are inhaled, they can remain in the lungs for a while, which can cause scarring, inflammation, and lead to health problems like mesothelioma later on.

While Claire's is conducting its own investigation, parents should take note of these reported findings.