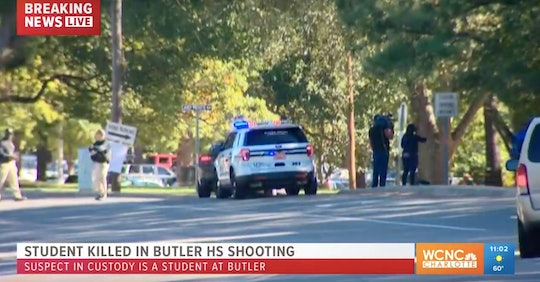 Parents of children attending Butler High School in Matthews, North Carolina found themselves receiving devastating news that has become all too common in the United States. According to HuffPost, the school went into lockdown following an active shooter situation. When the school district announced that classes would resume hours after the high school shooting, Twitter was understandably distressed and awestruck.

Romper's request for comment from Charlotte-Mecklenburg School System was not immediately returned.

Officials put Butler High School — located about 12 miles southeast of Charlotte, North Carolina — into lockdown around 7 a.m. EST on Monday morning after a student fired a gun at a classmate following an altercation, as CBS News reported. The victim was then transported to a hospital where he died from his injuries, according to local authorities.

The suspect was immediately taken into custody and shortly thereafter the Charlotte-Mecklenburg School System made a surprising announcement: by 9:30 a.m. the lockdown had been lifted and classes would resume normally. While parents were permitted to pick up their children, those remaining on campus would be resuming their studies, according to HuffPost.

The fact that students were expected to return to class so soon after experiencing what can only be described as a traumatic event left many on Twitter dumbfounded.

The sad fact is that school and mass shootings have become an almost regular occurrence in America, according to Business Insider. In response to the news of classes at Butler High School resuming, many on Twitter speculated that the decision was made due to desensitization to gun violence in schools.

Others pointed out the serious unlikelihood of students retaining any of the information presented to them in class that day. It was not specified in the CMS news release whether students would continue with their regularly scheduled lessons, but some people on Twitter worried that they would be punished for poor performance.

The Twitter account for the organization Let's Regroup likened classes after the shooting to punishment. "'Classes will proceed...' This is like punishing students and their parents for being traumatized by a #shooting on the school grounds," they wrote. "#ButlerHS students shouldn’t be in class. Hopefully your team is at least working on a plan to help students cope come tomorrow."

The Washington Post reported that "school shootings affect academic outcomes three years later," so one has to wonder what school officials expect the students to get out of classes on the day of a shooting.

Concern for how the students would cope was prevalent on Twitter. Many questioned how the students' mental health would suffer after the shooting, and this is a valid question. As The Daily Beast reported, in contrast to the abundance of research conducted on the psychology of school shooters, little is known about the effects of mass shootings on the mental health of survivors and witnesses. It is clear, however, that the malleable nature of juvenile brains makes the trauma particularly poignant.

The existing research on victims' mental health suggests that children feel lasting changes following a shooting. A 1997 research paper on the neurobiology of children who survived gun violence found that the violence and aggression they saw actually altered the shape of their brains. These children tend to suffer from attention deficit disorder, behavioral impulsivity, and numbness to the effects of violence that leads them to act violently themselves, as The Daily Beast reported. Other effects listed in the paper include sleep disturbances, anxiety, notable cardiovascular differences, and cognitive issues.

The Charlotte-Mecklenburg School System has not responded to the numerous tweets about the decision to resume classes. Therefore, one cannot be sure why that decision was made, but one thing is clear: a lot of people are looking for answers.