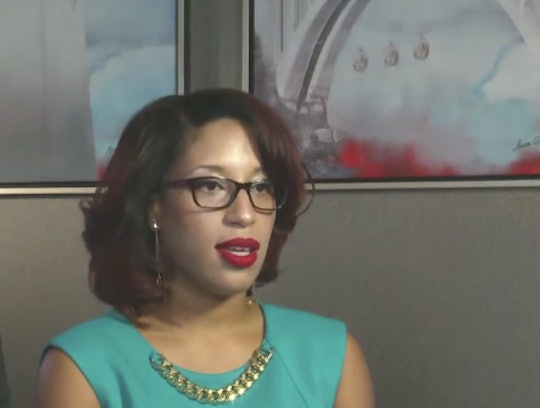 If Serial fans didn't feel like they were on enough of a rollercoaster with Adnan Syed's case when he was granted a new trial in June, they certainly will now. According to The Baltimore Sun, two former classmates of Syed's key alibi witness, Asia McClain, gave sworn statements that McClain said she'd lie to get Syed out of prison. This summer, over 15 years after Syed was convicted, the Woodlawn High School classmates — two sisters — came forward to give statements at the Maryland attorney general's office. They claimed they had an argument with McClain in 1999 one day in class, when McClain reportedly said she believed Syed was innocent and wanted to help him.

Syed was originally convicted of murder and sentenced to life in prison in 2000, but interest in his case spiked in 2014 thanks to the podcast Serial, which detailed the murder of his ex-girlfriend, Hae Min Lee, and the trial that followed. This year, fellow classmate McClain said at a post-conviction hearing that she had seen Syed at the library during the time in which Lee was murdered — and while a judge granted Syed a retrial due to different reasons (namely, the "ineffective assistance" provided by Syed's original lawyer), McClain's alibi could come into play during the retrial.

This year wasn't the first time McClain stated she saw Syed at the library, either — but it was the first time she did so in court. During the original 1999 trial, McClain wrote Syed twice offering to testify, but Syed's attorney never reached out to her.

However, the two Woodlawn High School sisters claimed McClain's story was always false. According to The Washington Post, court documents show that they reached out to McClain on Facebook before coming forward, with one sister writing, "I think it's sad he may actually be set free because of you and this fabricated story."

One of the sisters (both were unidentified in documents) also wrote:

[Syed] never told anyone, the police or his attorney to pursue you in the investigation because he knew you were full of it — he knew it never happened.

In the Facebook messages, McClain responded, "Wow, this is crazy. I'm not lying about any of this."

The attorney general's office is now looking to include the sisters' statements as part of the record, with Deputy Attorney General Thiru Vignarajah writing:

Affidavits that directly undermine McClain's truthfulness would reinforce the grounds for denying Syed's petition and would provide the post-conviction court an opportunity, with a more complete record, to resolve the McClain-alibi contention as a matter of law.

McClain and her attorney, Gary Proctor, have cast doubt on the timing of the sisters' statements. "I think the state is doing this so that they won't have to change the TOD or deal w/their star witness in a retrial," McClain wrote on Twitter on Tuesday. "I think the state wants to discredit me publicly because I present a problem for them. They don't care about nothing but winning."

This new development is only the latest "he said, she said" inconsistency in Syed's case — but it's an important one, especially since it's come to light just as McClain's alibi might actually make a difference in the case.

More Like This
Everything You Need To Know About Chris Stapleton’s Wife & Kids
Philadelphia Eagles Wide Receiver A.J. Brown Says His Kids Give Him “Strength”
Sheryl Lee Ralph's Husband & Kids Are Her Biggest Cheerleaders
Bluey's Mom Chilli Graced The Cover Of 'InStyle' & It's The Recognition She Deserves
What Parents Are Talking About — Delivered Straight To Your Inbox