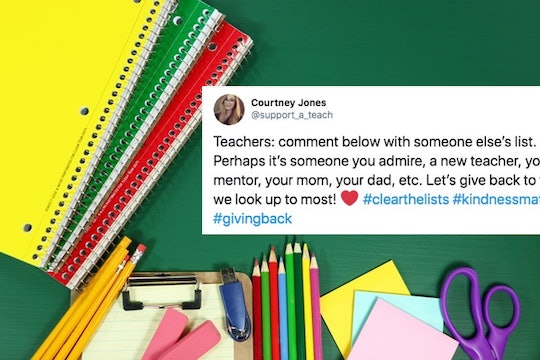 Any parent will tell you that back-to-shopping is expensive. Between notebooks, backpacks, pencils, and clothes, the costs add up quickly. And teachers all across the country also feel that financial burden. In an effort to support fellow educators, Courtney Jones, an elementary school teacher in Texas, has started an inspiring social media campaign called #ClearTheLists to help teachers with school supplies. Not only has the movement provided many teachers with the necessary items they need for the school year, the effort is also rejuvenating their passion for the incredible work they do.

Jones founded the movement under the name Teacher Amazon Gifting on Facebook in July 2019, according to an explainer video she posted to YouTube. "What it is is a bunch of teachers who originally got together to support other teachers by gifting each other things off of our Amazon wish lists," she says in the video. The effort quickly took off; Jones said her social media following grew from about 1,000 people to 25,000 overnight.

Teachers spend an average of $479 of their own money on supplies for their classrooms, according to research from the National Center of Education Statistics, as the New York Post reported. And as Jones explained, the needs are wide-ranging: "On these wish lists are things — not just pencils, paper, markers — we’re talking books, flexible seating, children’s books, novels, things that will help us in the classroom and build literacy build better practices, better pedagogy."

Any teacher can create an Amazon wish list and then share the link through the social media accounts Jones has set up. To manage the influx, she created regional Facebook groups for the West, South, Midwest, and Northeast. There is also a Professional Learning Community group.

Some teachers have shared that seeing the results of #ClearTheLists show up on their doorstep in that comforting Amazon packaging has affected them in ways they didn’t expect.

As one such teacher wrote on Twitter, "For me this movement has helped reignite my passion. After 14 years I was feeling burned out. To see so many helping has lit my fire within me and reminded me of why I wanted to be a teacher in the first place."

The great thing about crowdfunding is that getting involved in the process doesn’t have to break anyone’s bank. As Help A Teacher, founded after the 2018 Parkland school shooting, shared in a reminder on Twitter, these lists can easily get chipped away item by item.

"Maybe you can’t clear a list but you can send one item," Help A Teacher shared on Twitter. "It matters! It shows a teacher that someone cares and supports them. Send a package of pencils. Show your support!"

A few celebrities have noticed the campaign and are providing much-appreciated traction, according to Jones. "We’ve had a lot of publicity lately, Khloé Kardashian picked it up. She has kind of endorsed it, as well as Jeffree Star, a big media mogul guy," Jones told Virginia news station WHSV. Country singer Casey Donahew has also been promoting the effort, KXAS reported. Patton Oswalt also shared on Twitter that he's gotten involved with the movement by purchasing 10 items for a teacher who's "fighting cancer" and "can't afford supplies."

To find a teacher's list that you can get involved with, search for #ClearTheLists on Twitter, Facebook, or Instagram and simply start browsing and shopping. You’ll undoubtedly make a hardworking teacher’s day as they head back to school.