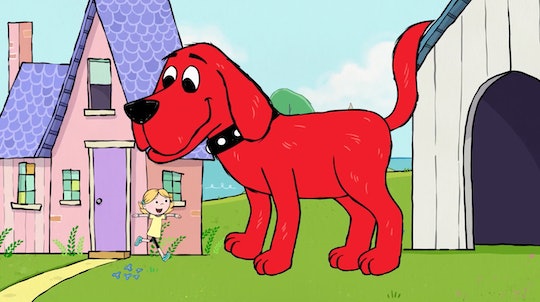 What's big and red and ready to take your kids on a slew of new adventures? Clifford, of course! That's right, Clifford The Big Red Dog is back in a highly-anticipated reboot hitting Amazon Prime Video and PBS Kids this December. Romper chatted with the voices behind the beloved characters about the show's aim to deliver fun and meaningful lessons to a new generation of kids.

Clifford, the biggest and reddest dog to ever be on television (OK, the only big red dog to be on television), is headed back to the small screen after a more than 15 year break thanks to a fun new reboot from Scholastic Entertainment. Although the new series sees some noticeable changes come to Birdwell Island — such as an updated animation style, a more active role for Clifford's owner Emily Elizabeth, and more diversity among the pair's human friends — it retains the same commitment to encouraging social and emotional growth in children that the original books and the original TV series possessed.

"We are very tied to character education around sharing, and problem solving, and not giving up, and taking care of your community, taking care of your friends, being responsible for your actions," Scholastic Entertainment President Iole Lucchese tells Romper.

Over the years, Scholastic has developed what they call the Clifford Credo, a list of 11 themes they ensure remain central to each and every Clifford storyline. "The Clifford themes that we are trying to hit in the TV show are community, empathy, accepting differences, perseverance, sense of accomplishment, emotions and how to deal with them, compromise and cooperation, asking for help, rules, and honesty," Lucchese says.

So, while watching Clifford will feel fun for your child, it will also be a valuable learning experience. "I think a show like this teaches kids, at a time like this, to be kids and to focus on the fundamentals of learning and exploration and growth and friendship," 27-year-old Adam Sanders, who voices Clifford, tells Romper. "It simply focuses on what it is to be a kid and to learn the fundamental life lessons that we all learn."

Of course, no two episodes of the show are the same. Instead, viewers get an engaging story and original song, as well as a valuable lesson, with each new episode.

"There are so many rollercoasters and exciting things that the kids, and basically all the characters, go on and so in every episode we get to learn something, we get a new sort of lesson," 13-year-old Hannah Levinson, who voices Emily Elizabeth, tells Romper. "Sometimes it will be that Emily really wants to take charge and she needs to learn that everyone has to have an opportunity to put their input into the event."

While the new Clifford reboot aims cover a broad range of themes, it remains committed to one lesson built into the very heart of the Clifford character long ago by Norman Bridwell: valuing what makes you, and others, different.

"He's unique, he's different," Lucchese tells Romper of Clifford. "Sometimes being different is hard and each of us have things that we feel are different about us and sometimes we feel like we don’t fit in. I think the challenge is for us to take what's different and unique about us and really, ultimately, see how it makes us special."

Clifford The Big Red Dog is available to watch on Amazon Prime Video on Dec. 6 and PBS Kids on Dec. 7.

More Like This
Jinger Duggar Was Taught Motherhood Defined Her — & Then She Broke Free
10 Parenting Lessons We Learned From Red & Kitty In 'That '70s Show'
Julia Fox’s Apartment Tour Is Peak Mom Realness
When Does 'Yellowstone' Season 5 Come To Peacock? Not Soon Enough
What Parents Are Talking About — Delivered Straight To Your Inbox