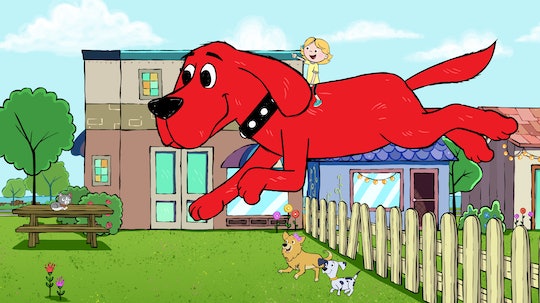 They say everything old is new again, and "they" didn't lie. It seems like there are reboots or remakes of beloved movies and TV series everywhere, these days. And the Clifford the Big Red Dog reboot will take kids along on fun new escapades.

You might remember the original PBS Kids series, Clifford the Big Red Dog, which premiered in 2000. While Clifford's story came to life onscreen nearly 20 years ago, the beloved, larger-than-life dog has actually been around since 1963, according to People. That's when Scholastic published its first Clifford the Big Red Dog book — written and illustrated by Norman Bridwell. Fast forward to today, and more than 133 million Clifford books in 16 different languages are in print, according to the publication.

While today's parents likely remember Clifford and his adventures from the original PBS Kids series, this reboot will introduce a whole new generation of kids to the big, red dog who lives on Birdwell Island. One significant change this time around, however, is the ability for Clifford and his owner to communicate. "Emily Elizabeth is a stronger, more empowered lead character to inspire today’s girls — and, for the very first time, she and Clifford will speak to each other, making their bond even more special," a news release from Scholastic Entertainment reads.

In the newly-reimagined show, kids and families will join Clifford, his best friend Emily Elizabeth and their pack of diverse and relatable friends on their escapades all across Birdwell Island —from pretending to be pirates and astronauts to solving the latest mystery and saving the day — while learning about being helpful, caring and accepting of differences.

What's more, is each episode will feature an original song — introducing kids to different types of musical styles. And there are some pretty impressive voices to help pull it off. Hannah Levinson is the voice — who recently finished shooting the first season of the Apple TV+ series Ghost Writer — is the voice of the new Emily Elizabeth, Another voice is that of Jenna Weir, who voices Emily Elizabeth’s best friend Samantha Mulberry. Weir made her Broadway debut last year as young Elsa in Disney’s Frozen the Musical. (She's also the voice of Katerina Kittycat on Daniel Tiger's Neighborhood, in case she sounds oddly familiar.)

Kevin Del Aguila is the head writer for the new Clifford series, and he also wrote the lyrics to the show's opening number, as well as songs featured in many of the episodes. (Currently, you can see him in Frozen on Broadway as Oaken.)

The Clifford the Big Red Dog reboot is slated for 39 episodes over three seasons, USA Today reported — and it drops on Dec. 6 on Prime Video and on Dec. 7 on PBS Kids. Which means there's still time to grab some of the old books, snuggle up on the couch, and introduce the kiddos the Clifford, Emily Elizabeth, and her friends. Happy reading!