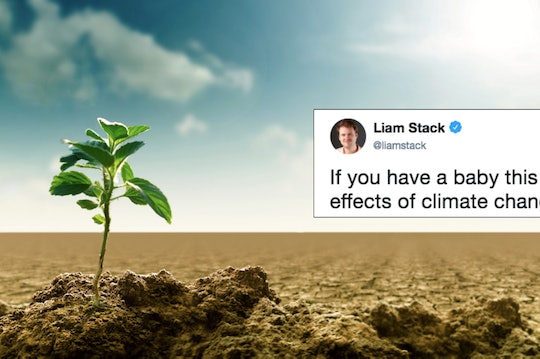 Whether or not certain individuals believe it, climate change is a real, scientifically-proven phenomenon that's affecting our planet. And it's happening at an increasingly alarming rate. If the world doesn't get its act together — and soon — to act on measurable plans for sustainability, then future children may live in a disturbing reality. So if you're not already deeply concerned about this issue, then climate change explained in this tweet will certainly motivate you to protect the world for future generations.

On Sunday, Oct. 7, the Intergovernmental Panel on Climate Change, a group of scientists that works for the United Nations to help guide world leaders, released a report that describes a grim outlook by the time 2040 rolls around — including worsening food shortages, wildfires, and a huge die-out of coral reefs. The report itself is alarming. However, a political reporter for The New York Times, Liam Stack, really put things into perspective, especially for those who are pregnant and/or have young children.

Stack wrote in a tweet on Sunday night, "If you have a baby this year, the most severe effects of climate change could cause a planet-wide crisis by the time that baby is 22 years old."

Climate change is undeniably alarming and terrifying, but put into this context makes it feel more real and pressing.

As for the specific details of the report, according to the authors, if greenhouse gas emissions continue along at their current rate, Earth's atmosphere will heat up by as much as 2.7 degrees (Fahrenheit) above preindustrial levels by 2040, as The New York Times reported. This would cause flooding of coastlines, along with worsening droughts and poverty, according to The Guardian.

But here's the real kicker: Before, scientists had estimated damage if average temperatures would rise by 3.6 degrees, as GQ noted. (At the time, this was considered the threshold for the most severe climate change effects.) The report released on Sunday, however, shows these effects will be hitting even sooner — at the 2.7 degree mark — than previously thought.

Unless the world powers can act swiftly together within the next few years, there are going to be dire consequences. As Vogue reported, the report specified the effort would cost $54 trillion and greenhouse emissions would need to be reduced by 45 percent by 2030, before it's "irreversible," as ABC News noted. Theoretically, it's possible. But politically? Not likely.

In response to Stack's eye-opening tweet, Twitter had varied reactions. One person sarcastically wrote, "22 is probably the ideal age for enduring a Mad Max Hell World. You still have the gifts and advantages of youth and you’re big enough to hunt for food and defend yourself."

Another Twitter user was thankful for the shock, writing, "Thank you. I don't understand why we haven't had this mindset already... Take better care of this world instead of polluting it... Especially if we claim to value children and the unborn."

Yet another Twitter user echoed my sentiments perfectly, writing, "Welp this is terrifying."

As alarming as this new report is — and as many large-scale changes that need to made — there are ways you can help fight climate change at in individual level. For example, instead of driving, consider biking, car pooling, or using public transportation, according to the David Suzuki Foundation. Other small everyday things that can add up include switching to energy-efficient light bulbs, unplugging computers and other electronics when your'e not using them, winterizing your home to prevent as much heat from escaping as possible, keeping an eye out for the Energy Star label when shopping for new appliances.

Oh, and don't forget to vote. Vote out candidates who don't support clean energy solutions or regulations on common-sense environmental regulations. Because, as this report shows, the world needs to act now.